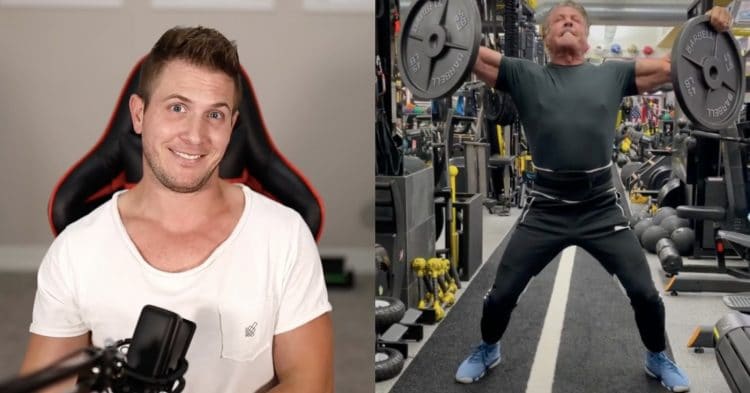 Sylvester Stallone recently had the internet buzzing with a video that appeared to see him using fake weights. Fitness YouTuber Scott Herman apparently has confirmed that these weights are fake, and seems to know the reason for this video.

The video that Herman is referring to sees Stallone using 45lb plates, one in each hand, while he holds them straight out in front of him and stands up from his knees. The video was posted to his Instagram with little context.

The issue with this, is that many people do not believe that the weights Sly was using were real. Several viewers pointed to the fact that the plates looked fake, and that at 74 years old, this is an incredibly difficult task.

Scott Herman is a fitness YouTuber, known for his gym tips and breakdowns of athlete training and injuries. He took to his channel to explain to his 2.5 million subscribers why Sylvester Stallone was using fake weights.

First was the proof of how he knows the weights were fake. He opens the video doing the same exact motion that Sly did, but with 45lb he was unable to keep his arms straight out. This was even using a plate with handles on it, something that the Hollywood megastar did not use.

The video then cuts to him speaking about the situation, before he goes to a website that sells fake weights, and points out how the plates look identical to the ones Stallone used. Moreover, he pointed to the fact that the plates looked brand new.

However the big point that Scott Herman points out, is the fact that the plates do not make a sound when they are dropped, and Sly cuts the video right after dropping them. He demonstrated the loud thump that plates make when dropped, even if they are dropped on a padded mat.

“You can just tell that he’s acting and he’s trying to make it seem a lot heavier than it is. Look at his wrist guys, his wrist isn’t even bending… So clear signs that the weights are fake.”

It Was A Publicity Stunt?

In itself, it is not a particularly big deal that Sylvester Stallone used fake weights, if that is indeed what happened, but that begs the question of why he would do that. Scott Herman seems to think the answer is simple:

“The weights are fake, but I think he did it just for a publicity stunt.”

Herman brings up the recent controversy with Chris Cuomo as an example of someone else using fake weights for publicity. He then points to another Instagram post from the action star, which came just after the video of him lifting the weight, promoting a Director’s Cut release of Rocky IV in theaters, as evidence of the root cause.

“Opening in theaters Nov.11 th ! WIDE SCREEN AND 4 K … So proud of all the technicians that did a great job in bringing this film & battle back to life in an amazing way!” Stallone wrote.

All in all, like Scott Herman explains, it does not matter if this was a publicity stunt from Sylvester Stallone, as this happens with people on a regular basis. Either way, it was a fun video to watch, and it certainly brought him attention.