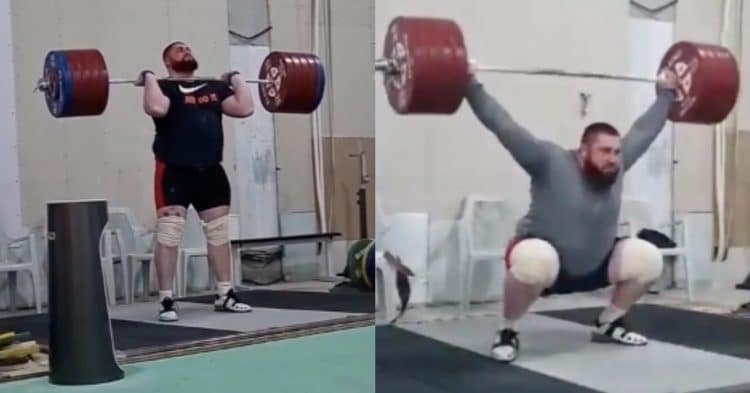 Georgian weightlifter Lasha Talakhadze already has a reputation as one of the best in the world. However he proved that beyond a shadow of a doubt recently, when he hit the heaviest snatch and clean & jerk ever caught on film.

It is rare to see Talakhadze pick up a barbell and not see something incredible afterwards. The super heavyweight has been at the top of the sport for years, and continues to look better with each passing training session.

Earlier this month we saw him secure not one, but two world records at the European Weightlifting Championships. This came when he scored a 222kg (489lb) snatch, that led to a 485kg (1069lb) total.

However Lasha Talakhadze proved this week that this was far from the end of his insane performances. His coach posted to Instagram with a video of the Georgian blowing the doors off of the snatch record that he just set.

The video sees the 27-year old landing an enormous 225kg (496lb) snatch, pushing past the snatch he hit a few weeks ago by an impressive 3kg. This was also the heaviest snatch that has ever been recorded on film, making it all the more impressive.

Now to be clear, this record was not official because Talakhadze only landed it in training, not competition. However regardless of that, it is still an unbelievably insane feat to see unfold, and to have captured on video.

That was not the end of the jaw dropping lifts that Lasha hit in training however, as he had another unofficial record still in the tanks. A subsequent video that Dr. Giorgi Tchintcharauli posted sees the weightlifter also scoring the heaviest clean & jerk caught on film too.

This lift was a gigantic 270kg (595.25lb) clean and jerk, which Talakhadze pulled off with seemingly relative ease. If done in competition, this would have surpassed the record that he currently holds for the lift, which sits at 264kg (582lb), which he set in 2019, at the World Championships in Thailand.

The level of accomplishment that has been seen from these two videos is hard to put into words. It is going to be exciting to see the Georgian back in competition, so he can solidify these lifts as official new records.

At just 27 years old, Lasha Talakhadze has far from reached his ceiling as an athlete. Given just how much he is already able to lift, that is a mind boggling notion, but still true nonetheless.