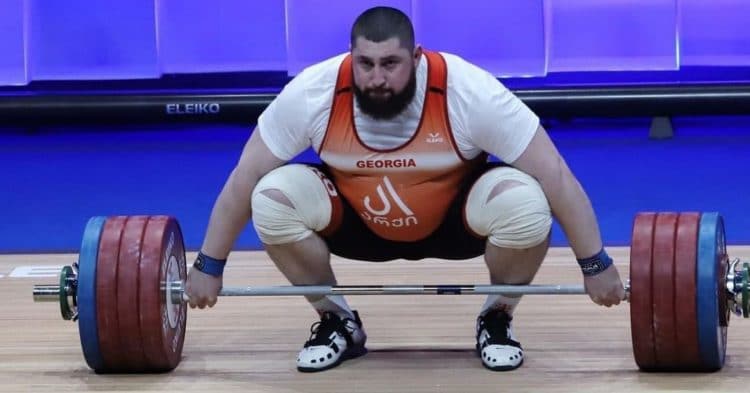 In case you have been living under a rock, Lasha Talakhadze is a pretty good weightlifter. He earned a pair of new world records over the weekend that served as a reminder of that very fact.

Before even competing at the 2021 European Weightlifting Championships, Talakhadze had been turning heads with his recent performances in the gym. It made it clear that the next time he compete was going to produce something impressive.

After all, this is the same Georgian super heavyweight weightlifter who has already been putting up world record performances. Whether it be in the gym or on the platform, he is always proving himself as one of the best lifters in the world.

Over the weekend, at the EWC, Lasha Talakhadze proved this to be true yet again. Not only did he walk away victorious from this competition, but he left with two new world records on his resume.

As seen in a post to Instagram, the Georgian managed to hit a whopping 489lb (222kg) snatch for the first record. This was added to his other successful lifts that led to a 1069lb (485kg total, which landed him a second record-setting performance.

This was an absolutely epic performance from Talakhadze, but the magnitude of this snatch is only amplified by the fact that this was not his heaviest one ever. In the training leading up to this contest, he showed that he has even more in the tank than just this.

On top of that, in his last outing he scored this same world record in an unofficial setting. While this happened in a competition, he did so in a fourth attempt, rather than in the main three attempts that would have solidified it as an official record.

Now that this record is official, Talakhadze is undeniably recognized as one of, if not the best of all time when it comes to the snatch. This was the heaviest of all time in competition, and surpassed the world record that he previous held by 2kg.

At the end of the day, this is just the latest chapter of what is shaping up to be an insane career. After scoring gold at the 2016 Olympic Games, we knew we were looking at something special, but he has only kept improving from there.

With the way he has been looking of late, it will be interesting to see the next move that Lasha Talakhadze makes. He is without a doubt one of the best to ever do it, and it is an honor to see him do his work.