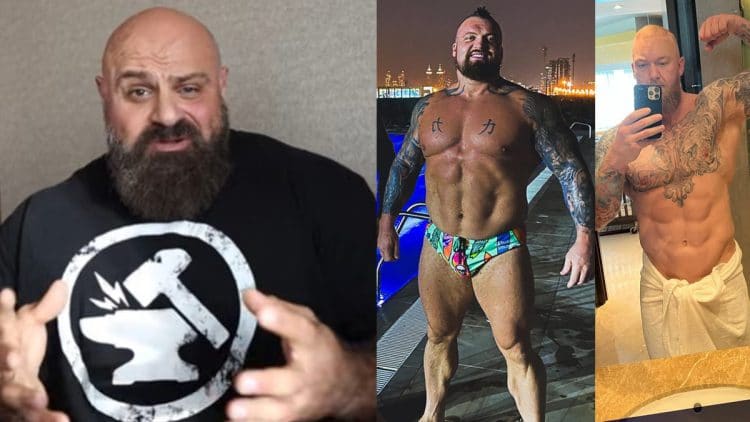 The marquee boxing match between two of the world’s strongest men is just days away. After the two combatants got heated during their face-off, Strongman Laurence Shahlaei gave his thoughts on the storied rivalry set to be resolved this weekend.

Laurence Shahlaei is a successful Strongman himself and shares a unique perspective on the hostility between Eddie Hall and Hafthor Björnsson. Laurence has competed against Hall and Björnsson in the past and understands why the two have reached a boil in terms of pre-fight chatter and trash talk.

Yesterday, Thor and Eddie faced off and things escalated quickly. Eddie crashed one of Thor’s training sessions and the interaction resulted in both competitors spitting at each other while being held back by their teammates. Following the violent face-off, Thor revealed that Eddie might have seriously injured someone amid all of the chaos.

The tension between Eddie and Thor developed following the finals of 2017 World’s Strongest Man where Eddie Hall captured the title. During the Viking Press event, controversy began to spill over. After one of Thor’s reps was disallowed due to double-dipping, Eddie won the show by just one point. With how personal things have become between the two Strongman, Laurence Shahlaei sheds light on some of the hostility felt by both athletes.

Big Loz published a video on his YouTube channel talking about the face-off and his thoughts on if shady practices were at play during Eddie Hall’s 2017 WSM victory.

“Yeah, and I think that’s a fair enough point, you know. Any Strongman competition that we get, you discuss the rules beforehand. Once you start the events of the events, and the best man wins and to be fair to Eddie, he was the best man that year (2017). There was a lot of controversy over certain events like the Viking Press, but every single competition I’ve been to, there’s always athletes saying, talking about, ifs and buts. Oh, if I did this, or if I did that, or if this didn’t happen.

That’s just natural, athletes do that all the time. The fact is, you go on what happens. Eddie Hall performed exceptionally well. He won, I think three of the events outright, he was in a good position going into the stones where he had a clear margin. In the end, he ended up winning, he only won by one point in the end, but when you have that margin to work with, sometimes you do just work within that parameter. Or whereas you have to do better, you’re able to dig a little deeper. So, from someone who was in the competition, I placed seventh in that show. I truly believe Eddie deserved to win in 2017.” Laurence Shahlaei said.

Laurence also competed at the 2017 WSM where he placed in seventh. He believes Eddie’s exceptional performances at three events led to him capturing the title when he defeated Thor.

The two combatants met face to face once more ahead of their massive fight. Things weren’t quite as explosive, but the two Strongmen discussed their differences. Laurence believes much of their hostility is in the moment and maintains that it would be silly if the two didn’t shake hands when all of this is put to bed.

“I hope this is just in the moment. Not thinking, something stupid got blurted out but to compare rape or being punched in the face to a grown athlete, two competitive men, not congratulating each other over a sporting event, come on that’s ridiculous. Laurence added.

Admittedly, Big Loz understands a certain degree of hype and entertainment is needed for the event and circles back to the all-time world record deadlift Thor set in 2020, which bested Eddie’s record by just two pounds.

“So obviously, a lot of this face-off is to building hype for this weekend’s event. Two of the biggest men ever in a boxing ring. Former World’s Strongest Man, 2017 WSM, 2018 WSM, the only two men that have deadlifted 500 kilos or more, now we can talk about if it was in competition was it out of competition. The fact is, these are two incredible athletes, that myself and along with many people have a tremendous amount of respect for, in terms of their athletic ability, and I really, really hope, they sort out all of their issues on the weekend, shake hands, and are done with this.” Big Loz concluded.

Following the sit-down between both athletes, insults were hurled on both sides. Hafthor brought up allegations of him not shaking Hall’s hand at the 2017 WSM. Eddie believed it wasn’t a genuine hand-shake and expressed that Thor smeared his 2017 win and never apologized.

RELATED: Eddie Hall Recovering From Chest Infection And A Possible Concussion Ahead Of Hafthor Bjornsson Fight

With just a few days until the pair of Strongmen lock horns, anticipation for the fight is brewing. Given the history and drama involving both parties, at least Laurence Shahlaei can take a neutral position while discussing one of the biggest fights of the year.