Jeremy Buendia is putting out clues that he may end his retirement and go for the Classic Physique Olympia crown after posting an impressive physique update. 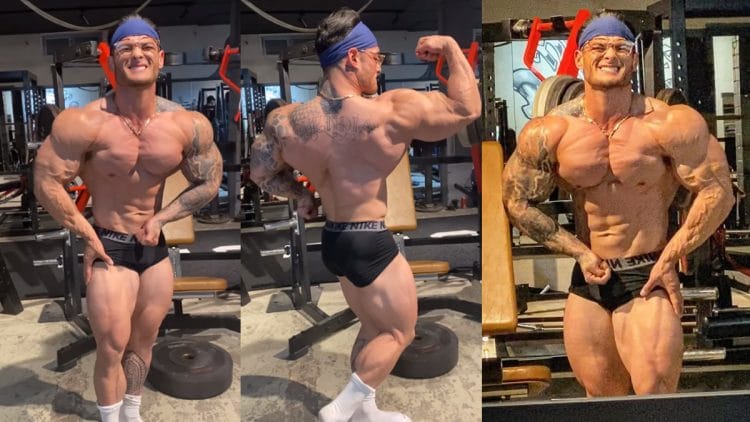 Reigning from 2014 to 2017, four-time Men’s Physique Olympia champion Jeremy Buendia walked away as one of the top competitors in his division. After sharing a recent update during retirement, speculation about a move into Classic Physique is at an all-time high.

Before the age of 30, Jeremy managed to win Olympia four times until 2018. After placing fourth at 2018 Mr. Olympia in Men’s Physique, the dynasty ended, and he sailed off into retirement. While some have suggested that his best days are behind him, he has gone to great lengths to keep up an impressive physique. Announcing a comeback in 2020, Jeremy made it clear that he would be changing his training regimen and working with the guys at Oxygen Gym, in Kuwait. Despite a lot of excitement about his 2020 return, it never materialized on the Olympia stage.

In the last few years, Jeremy has called out Men’s Open bodybuilders like 2008 Mr. Olympia Dexter Jackson and Sergio Oliva Jr. Buendia mentioned that fellow bodybuilders love to talk trash behind his back on the computer but have nothing to say when he’s in front of them.

This wasn’t the first occasion where Buendia found himself feuding with a bodybuilder. Jeremy took issue with Antoine Vaillant, who he believes made a joke out of the Men’s Physique division. Despite defending the division he once ruled over, it appears Jeremy might be hinting at a move to Classic Physique rather than a return to his original stomping grounds.

In a recent post on Instagram, Buendia delves into the possibility of returning to competition after sharing an impressive physique update. The video has garnered tons of attention as the 4X Men’s Physique Olympia champ shows off an improved physique, which to some, is a possible sign that he is eying a move into Classic Physique.

“Back home in the states after a great trip to Germany for FIBO. Feeling more motivated than ever to get to work and keep making more improvements. I know I’m still capable of being a lot better than this. Im going to anchor down on my diet and really focus on making this comeback happen. Appreciate all the support & encouragement today. Feels good to be back you guys. I’ve learned from my past, and I’m looking forward to doing it the right this time around. 🙏🏽💯” Jeremy Buendia posted.

Following the update, the comment section exploded as many wondered if Jeremy is improving his physique for a possible show in the future. Bodybuilder Craig Golias responded to Jeremy’s update.

“CLASSIC PHYSIQUE OR WHAT?????” Craig posted.

Jeremy wouldn’t give a clear answer, but it seems he’s keeping his options open. While a move to Classic Physique is a possibility, Buendia expressed concern about increasing mass without going over his weight limit.

@logan_franklin thanks bro. Just trying to get huge like you did! Jeremy Said

“@regangrimes thanks man. I’m finally back in a rhythm.” Jeremy said.

Jeremy has wondered how two-time Classic Physique Olympia champion Breon Ansley has made weight in the past. After a commenter revealed that the cut-off is 192 lbs, not 180 lbs in Classic, Jeremy shared his plan to wait 12-16 months to assess his body’s progress before committing to a switch.

RELATED: Mike Rashid Gets Into Altercation With Jeremy Buendia

Given his accomplishments in the sport, many bodybuilders, including Men’s Open competitors want to see Jeremy exit retirement and perform on stage again. Jeremy Buendia acknowledges that he’s a little bigger nowadays but left the door open for a potential move into Classic Physique.