As he continues offseason prep, Hunter Labrada is maintaining size and improving his overall conditioning. 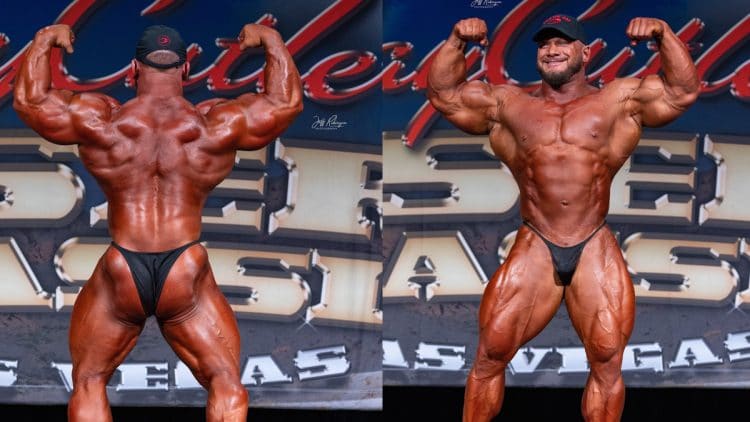 IFBB Pro Hunter Labrada is making the most of his time away from competition. In a recent guest posing appearance at the Jay Cutler Desert Classic, Hunter showed off impressive conditioning.

Accumulating muscle mass without sacrificing conditioning is one of the most difficult hurdles as a bodybuilder. Hunter has managed to accomplish that feat and proved it during his 2021 season. Labrada kicked off last year with a first-place showing at the Chicago Pro. He left no doubt with the judges after defeating one of the sport’s rising stars Brett Wilkin, who took second place respectively. The performance resulted in Hunter receiving his automatic invite to 2021 Mr. Olympia.

Hunter, son of IFBB Pro Hall of Famer Lee Labrada followed through with his second Olympia appearance where he secured fourth place in 2021. A vast improvement from 2020 when he finished the show in the eighth. As of late, the Men’s Open standout has been guest posing as he aims to once again improve his placement at the biggest show of the year.

In a recent post on Instagram, Hunter shared footage of him guest posing at the Jay Cutler Desert Classic. It appears Labrada is continuing to add muscle without sacrificing definition or aesthetics.

Despite 2022 Mr. Olympia still several months away, Hunter is making the most of his time away from the stage. The guest posing appearance bears even more significance because Hunter isn’t known for sharing physique updates often. Nevertheless, it’s safe to say he’s gone to great lengths to make sure he adds size to his build.

Hunter and 2021 Arnold Classic champion Nick Walker went head-to-head last year on the Olympia stage. “The Mutant” landed in fifth place in his Olympia debut. Hunter nailed fourth place and narrowly defeated Walker. In response, Nick later criticized the results by implying that his physique was more complete than Hunter’s.

During the offseason, it seems any time Hunter is sharing a physique update, Nick responds with his own, and vice-versa. This Dec., their ongoing rivalry will be settled. Nick has opted to take the year away from competition to improve his physique and chose not to defend his Arnold Classic title last month.

Nick and Hunter are pushing each other inside and outside of the competition. While Nick believes his package was more appealing to judges at last year’s Olympia, bodybuilding legend Jay Cutler disagreed and stated that Hunter’s physique was ‘prettier’.

Given his symmetry and proportioned build, Hunter is prepared to challenge some of the most seasoned IFBB Pros when he’s back in competition. After guest posing at the Jay Cutler Desert Classic, Labrada intends to deliver an undeniable package when he graces the Olympia stage in Dec.