The number to squat is a personal goal the powerlifter has had in her head for over 4 years. 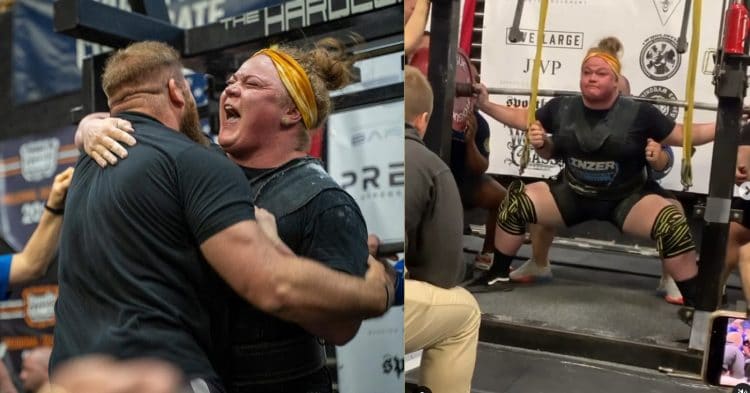 This week’s competition with the American Powerlifting Federation Cincinnati Pro/Am has been record-breaking, with a few new all-time world records getting crushed. We previously reported on Jaclyn Cornwell’s all-time-world record (ATWR) with a 258.5kg/570lb squat in the 67.5kg weight class. For the women, Leah Reichman slammed her own ATWR squat of 399.1kg/880lbs, equipped. She is lifting in the 90+ weight class.

Reichman’s ATWR came after a first lift where she lifted 860lb. She posted two videos on Instagram with messages to her supporters, and Reichman wasn’t shy about expressing what this meant to her personally, noting that “this number” was something she’s had in her head for over four years.

This is clearly not an easy lift for Reichman, but she crushes it.

Video 1: 860lbs. This was one of the first “long-term” powerlifting goals I made as a newbie raw lifter. This number is something I’ve had in my head for 4.5 years. I worked hard for this. #AllTimeWorldRecord

Video 2: 880lbs. Icing on the cake and one stepping stone closer to a huge milestone for female powerlifting.

Later, Reichman posted gushing posts to other women powerlifters in the world about the “heaviest squat ever performed by a woman.” She wasn’t shy about hiding her feelings, calling it, “pure freaking emotion.”

Jessica Reichman began powerlifting competitively at 27 in 2016. Now, in her thirties, it’s difficult to see if age has created a challenge for her. In this week’s competition, her bench press was not the training focus, obviously, as it was lower than what she has performed in the past. Her deadlift on the other hand was another personal best by 1.7kg.

Reichman is not quite the strongest woman in the world, yet. She has some nice achievements that are getting her closer, though. She is still holding the second heaviest total at 862.5kg/1,901.5lb. The only female powerlifter lifting heavier than that on record is Swanson at 930kg/2,050.3lb, a total that has been on the books since 2005.