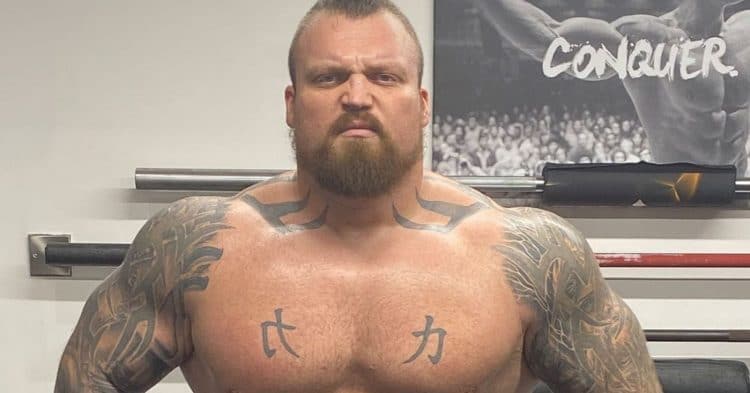 Even though he has largely transitioned away from strongman training, Eddie Hall is still ridiculously powerful. He put that strength on display recently, when he worked to push himself to the max during a recent shoulder session.

For about a year now, Hall has been putting his focus into training to box his strongman rival, Hafthor Bjornsson. They are looking to settle their beef in the ring this September, and they have each been working hard to get ready.

Throughout this process Eddie has lost a ton of weight, which was largely a result of the heavy cardio workouts that he has been doing. With six months to go, he looks to be in the best shape of his life, and is absolutely shredded.

However just because he has dropped weight does not mean Eddie Hall is losing his strength. He wanted to test that theory recently with a shoulder training session that he uploaded to YouTube.

At the start of the video, while getting his preworkout ready, Eddie explains that he is doing a lot of heavy sparring nowadays. As a result, he is sore in almost every part of his body, so he plans on taking things easy.

“I think what we’ll do today, is we’ll try to go heavy on some things, but try to get more of a pump. Just get a lot of blood through the shoulders, and that will just help recover,” Hall said.

While Eddie says that his goal for this session is mostly to get a pump, he could not resist pushing himself. He started off with the dumbbell press, going from 20kg (44lb), all the way up to 62.5kg (137.5lb), which he did for a whopping 20 reps.

Obviously feeling good, although he says that his shoulder was bothering him a little, Hall then went to the seated barbell press. He said from the start that he wanted to go for a one-rep max here, so long as his shoulder held up.

“My shoulder’s still intact, so that’ll do me. 180 for three, I’m still strong,” Hall said. “I’m really happy with that, it shows that the strength’s still there.”

To conclude the shoulder workout, Eddie does cable side raises and rear delt flys, just ending the session in a strong place. By the end of it, he jokes about being broken, but says that everything is clicking how it should be.

Eddie Hall has about six months to go until his fight with Hafthor Bjornsson, but it seems like his boxing training is picking up. With his strength staying where it is, things are going to be interesting when these two behemoths meet.