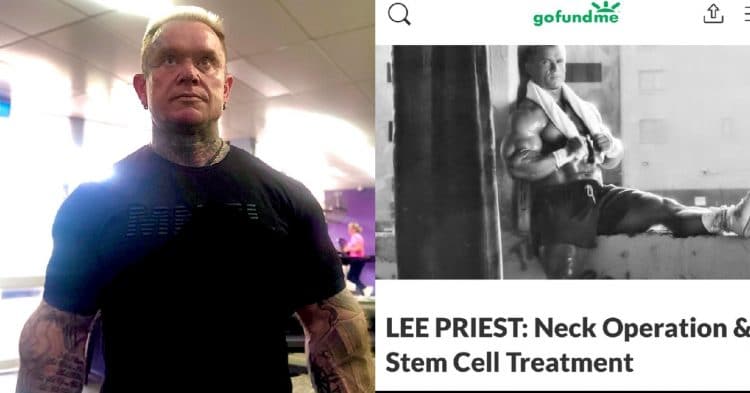 It has been a hard road for Lee Priest since he got into an accident and injured his neck. Now he is looking to get some help paying for a surgery to perhaps repair some issues he is still having.

Back in 2015, Priest got into a serious car accident that left his neck severely injured. Not only did it force his retirement from bodybuilding competition, but to this day he is still having problems with the mobility, leading to constant pain and atrophy. The muscles on his right side have severely declined and although he can train a little bit, his ability to build his body has been virtually eliminated.

In addition to this, Lee Priest has also been in a constant battle with insurance companies about paying for his treatment. This was something he opened up about recently, after a mock video became something that the insurance companies tried to use against him. This has led him to make the decision to start a GoFundMe page to get donations in order to help him pay for stem cell surgery on his neck.

“The last five and a half years has definitely been not the best ones in my life,” Lee said on the GoFundMe page. “One morning I was happily enjoying my training, thinking of future titles I could add to my collection and next minute the opportunity was taken away from me by a reckless driver.

The car crash crushed a nerve in my neck which led to muscle atrophy and loss of strength in the right side of my body.

On a grand scheme of things, this injury might not seem like the most serious one, especially when you look at the outcome of most car accidents. But for me, whose life was and still is dedicated to bodybuilding was a career-ending one.

I cannot build muscle mass or even have symmetry in my upper body.

However, there is still hope as an operation combined with a stem cell treatment could help me to return to my formal self.

Big Thank you to all the fans who stuck with me for all these years!

It is heartbreaking that Lee Priest has been having so many problems since this car accident five years ago. He has tried countless surgeries to repair his neck, but nothing has worked. Hopefully he can use this GoFundMe to get this procedure, and this will be able to help him.

How and Why To Do The Windmill Exercise