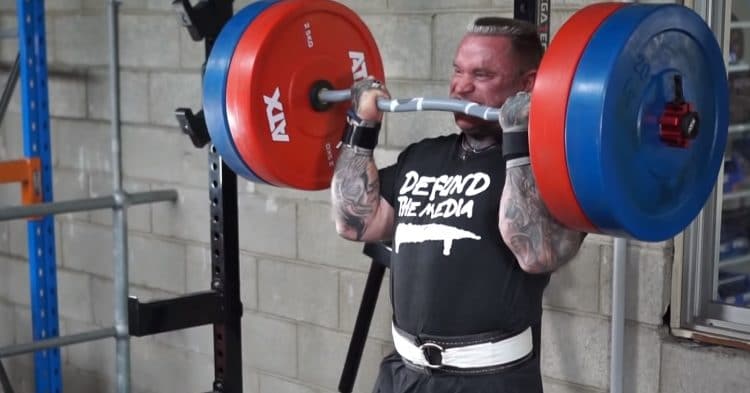 A few months ago, Nick Miller of Nick’s Strength and Power YouTube channel posted a video about the legendary strict curl.  He discussed a little about its history, records that he himself set in this lift, and the heaviest strict curl performance ever of 113kg/249lbs, achieved by arm wrestler Denis Cyplenkov of Russia.

Powerlifting sensation Larry Wheels decided that he wanted to chase this record and so far, he has been able to strict curl 95kg/209lbs, having never actually trained extensively in this lift. This means that he was able to come within about 40 pounds of the all-time record.

But most recently, legendary former IFBB pro bodybuilder Lee Priest actually sent Miller a video of him performing a strict curl of 221lbs/100kg, of which he appeared to do with relative ease.

This beats Wheels’ best strict curl and is not very far from Cyplenkov’s 249lbs, as it was just 28 pounds less. We also have to add that Priest is 48 years old with an injury apparently, which makes this feat all the more impressive. He even leaned his backside up against part of a power rack to ensure that the curl was legitimate.

Miller explained in his video that Priest is known to troll a bit but the Australian legend confirmed with him that it was real, and Miller did his own digging to confirm that the weight actually added up to the claimed 221lbs.

Priest is one of the greatest bodybuilders of all time, known for putting much larger guys to shame in his prime, at a height of just 5’4″. And no one could argue the fact that he had some of the most impressive arms in bodybuilding history. He was no slouch when it came to lifting heavy weights either.

Priest is clearly a genetic freak, strict curling 212 lbs at 48 years old, with an injury to boot. But will he attempt to break the record? Well, as of now, we don’t know how far he’s willing to go to potentially become the new king of the strict curl. However, the fact that he shared a clip of his strict curl may imply that he’s secretly training to best Cyplenkov’s record.

Not to mention, it appeared that he could have curled a little more weight than he did. We’re going to assume he doesn’t practice the strict with this amount of weight regularly if he even trains in this lift at all. But with several months of serious training, it’s very possible that a healthy Lee Priest could be a real threat to the record.

Do you think Lee Priest can break the strict curl world record?