The cable lateral raise has notable advantages over the dumbbell variation. If you want round delts, this is a must-have in your shoulder training arsenal. 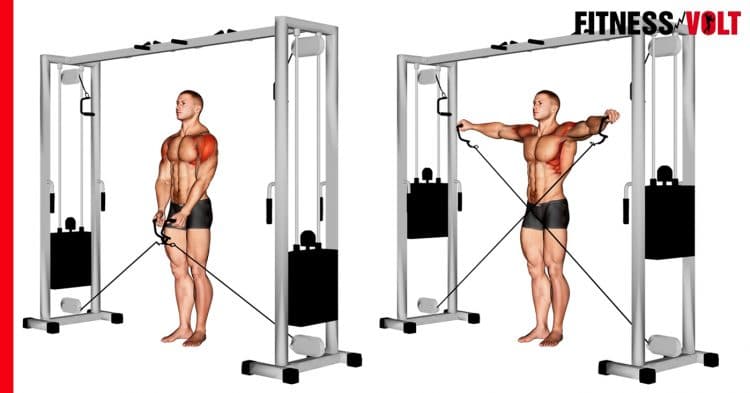 The cable lateral raise is an exercise variation that is very effective in building the outer portion of the deltoids. If you want to appear wider up top, then you’ll definitely want to incorporate this type of exercise into your training regime. It’s an isolation movement so you won’t be able to use maximum poundages, but you’ll feel your muscles working much better while maximizing results by really focusing on good form and using a weight that you can handle.

Here’s a guide to the cable lateral raise…

We’ve provided basic anatomy of the deltoid lateral and other muscles involved in this exercise.

The deltoid lateral is one of three heads (anterior, lateral, and posterior) that make up the shoulder. It’s responsible for assisting in arm abduction between 15 and 100 degrees while the other two heads help to stabilize the arm. It gives width to the upper body.

The deltoid anterior or front deltoid is one of three heads that make up the shoulder. It assists in the stabilization of the arm during abduction and with help from the pectoralis major, flexes the arm when walking.

The serratus anterior originates at the “first to ninth ribs at the lateral wall of the thorax and inserts along the superior angle, medial border, and inferior angle of the scapula“. Its primary function is the protraction of the scapula. It also assists the upper and lower fibers of the trapezius muscle in upward rotation of the scapula to facilitate movement such as overhead lifting.

How To Do The Cable Lateral Raise

The cable lateral raise should be performed a little differently than the dumbbell variation due to the constant tension that cables provide.

Here are step-by-step instructions for this exercise.

Bodybuilding legend Rich Gaspari shows how this exercise should be done.

3 Variations of The Lateral Raise

It doesn’t get much better than the cable lateral raise. However, there are several variations just as effective for building up those delts. Here are three that we think are a must… 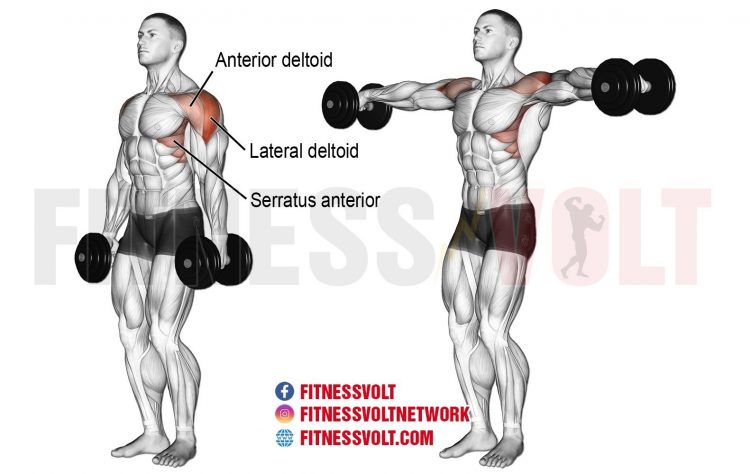 The dumbbell lateral raise is not going out of style anytime soon and it probably never will. Despite all of the machines and fancy pieces of equipment available, it’s still a favorite and it still works amazingly well. Plus, it’s a free weight variation which means it develops stabilization and allows you to identify and correct a weaker side.

We have seriously come a long way in the options that we have available at most state-of-the-art fitness centers. And it’s definitely tempting to want to skip the free weights altogether and just stick with these fancy new machines.

While that’s not ideal, machines absolutely have their place in any training regime. If the machine locks you in place, you don’t have to stabilize the weight, which leaves you to focus on the movement itself. Consequently, you may also be able to load up a little more weight to overload the muscles a bit more as well.

Resistance bands offer many of the same benefits as cables. However, it’s a great movement when you don’t have access to weight, or if you prefer to train at home with bands. There are many different levels of resistance

How To Incorporate The Cable Lateral Raise Into Your Training Routine

Typically, isolation exercises are performed after compound movements because you need all of the strength and energy for the multi-joint lifts. But when it comes to shoulder training, performing a lateral raise is great for warming up the shoulders as this area is often prone to injury.

That doesn’t mean burn yourself out before you get to the shoulder press, but a few warm up sets of cable lateral raises or any form of this exercise beforehand is often recommended. This way you get the shoulder joints warmed up to function properly.

The lateral raise is also good to do before chest presses, although not necessary for everyone.

The following workout will target all three heads of the shoulders in a single set. So, you’ll do one set of each exercise without taking a break. Although, you can take a short rest after all three exercises have been completed. Choose a weight that’ll allow you to take each set to failure.

Your delts should be on fire but they’ll be primed for growth!

The cable lateral raise should be a part of your shoulder training if it’s not already. It has advantages that you don’t get with free weights and if you want boulder shoulders start doing it! But that doesn’t mean you need to limit yourself to just this exercise for building the lateral delts. Mix things up every now and then to maximize muscle development.

Wide lats, thick traps, and a railroad-like lumbar are desires of most lifters. The problem is that only a few...