Logan Aldridge, who competes in the Upper Extremities division of the 2021 NOBULL CrossFit Games hit a massive PR with a 502lb deadlift 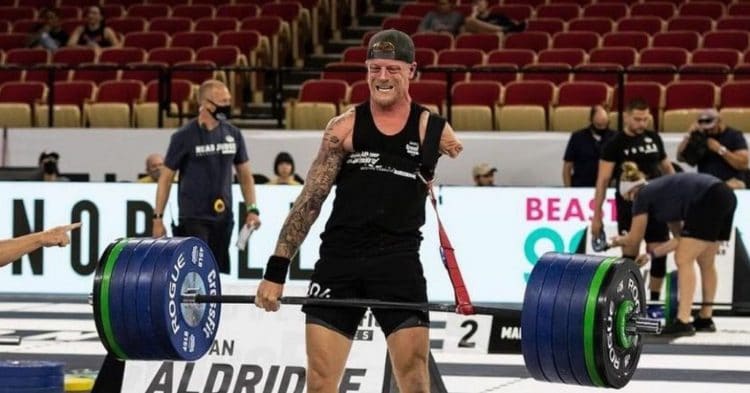 The 2021 NOBULL CrossFit Games kicked off on July 27th, starting the contest with the first ever appearance of the Adaptive Divisions. In the Upper Extremities division of this contest, Logan Aldridge ran away from the competition with a big deadlift PR.

Aldridge headed into the CrossFit Games excited to be a part of this historic year of competition. This was the first time in Games history that any sort of Adaptive Division would make an appearance, featuring three categories: Upper Extremities, Lower Extremities, and Neuromuscular.

Logan fit into the first of these divisions, competing with his left arm missing, but that did not stop him from putting on an incredible display of heart and strength. The biggest of these came in the third event, during the first day of the Games, which was a max deadlift event.

With a strap on his left shoulder attached to the barbell, Logan Aldridge managed to pull a whopping 502lb deadlift, surpassing his previous best by an unbelievable 12lb. After the fact, he reposted a photo of him hitting this huge deadlift to Instagram, and expressed how excited it meant made him.

This was an incredibly inspiring moment from Logan Aldridge during the first day of the 2021 NOBULL CrossFit Games. That is essentially what the Adaptive Division is all about: cultivating moments that will inspire everyone watching, and giving the differently abled a chance to shine.

In the end, Logan would come second in this deadlift event, falling 23lb shy of Josue Maldanado’s 525lb event winning pull. Although this certainly helped him along the way in terms of points, en route to coming in third place by the competition’s end.

Here are Logan Aldridge’s scores from the 2021 CrossFit Games:

Logan Aldridge was one of the five competitors that participated in the Men’s Upper Extremities partition of the 2021 CrossFit Games. He came in third place here, and looks to be someone worth watching out for in future Games.