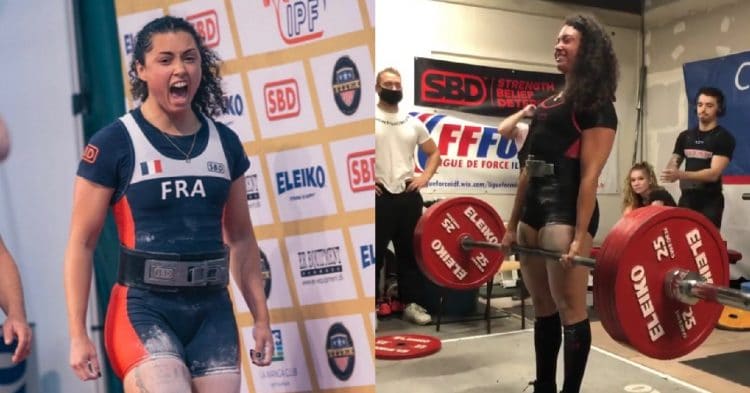 Things have been picking up like crazy for French powerlifter Lya Bavoil at the end of 2020. She recently hit the weights in a big way during a meet over the weekend, and it has fans’s heads spinning.

Things have really been moving in the right direction for Bavoil since 2020 kicked off. Of course she had to work through the same types of difficulties that have effected everyone this year, but she has not wasted any time and has continued to improve. This has been clear as the fall came in, with her getting back to a more competitive schedule, and performing better than she had before the time off.

It is unclear what meet this was or who else competed alongside Lya, but there is one thing that is abundantly clear. The growth she has shown here, compared to her last meet in September, is impossible to overstate. Weighing about a kilo less than she did at the Silent Worker Meet, she was able to match her competition best squat. While her bench was a little less than her best, she managed to kick her deadlift best up 5kg, also increasing her best total in competition from 542.5kg, to 545kg.

The amount of time and energy that Bavoil has put into improving on her deadlifts has clearly paid off. She has spent the last several weeks of training putting up some serious numbers, and now we know why. Here she is just a few days before the meet, doing a whopping five reps of a solid 200kg (441lb) deadlift, all from her living room.

There was already a ton of hype behind the skills of young Lya Bavoil, but after these last few months it is clear that she has something big cooking. Time will tell how she closes out the year, but if everything goes well then we can expect big things from her in 2021.