Brian Shaw Pulls About 6kg Short Of World Record Deadlift, By Doing A 494.8kg 18-inch Deadlift As He Closes In On 2020 World's Strongest Man 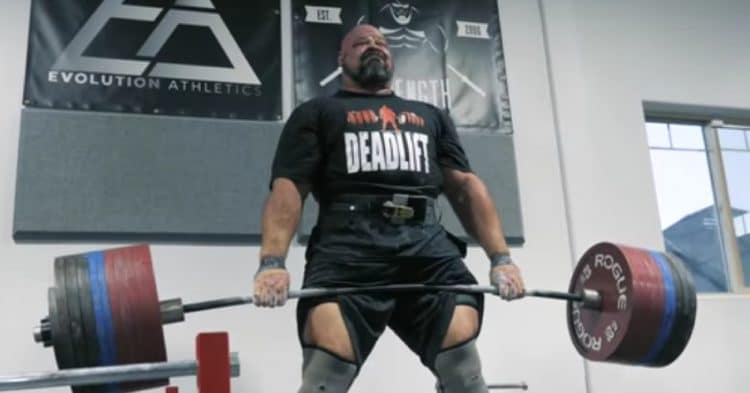 There was already thought that Brian Shaw is going to be the favorite to win the 2020 World’s Strongest Man. However a recent deadlift training session seemed to have collapsed any remaining doubt of how he will perform at the event.

Heading into 2020, there were some lingering questions about what Shaw had to offer this year’s WSM. There were talks of his somewhat diminished returns since dropping a ton of weight and dealing with injuries, even to the point where he was unable to qualify for the 2020 Arnold Strongman Classic. This ended changing however, as the year went on and the event drew closer. Fan favorite Hafthor Bjornsson retired from strongman, 2019 WSM winner Martins Licis announced that he was not competing this year, and someone who was considered a favorite to win, Mateusz Kieliszkowski also was forced out of the contest, thus leaving the door open for a possible fifth World’s Strongest Man title for Brian.

Regardless of who is not competing at the WSM, Brian Shaw wanted to make sure that people were not forgetting about his skills. With less than a week to go until the contest, Shaw took to his YouTube to share one of his final heavy training sessions, focusing on his deadlift. He explains that he chose to do this training session because there has been some rumors that one of the events of the WSM is going to be an 18in deadlift.

“We don’t know 100% but as of the time I’m filming this video I think that there’s enough of a rumor that has been going on long enough that in the finals of the World’s Strongest Man there will be an 18-inch deadlift,” Shaw explained. “Now what bar it will be, I don’t know. What type of setup it will be exactly, I don’t know.

“I’ve done a lot of my training through the cycle with the power bar which is much, much stiffer,” Shaw continued. “So today we’re going to go with the deadlift bar. I’m assuming, from a visual standpoint, if they can get a bar that’s flexible for an 18-inch deadlift, that’s going to look much better on tv.”

With that intro out of the way, Shaw got to work on some warm up sets, focusing on his form and technique as he went. He started with 595lb, before hitting 771lb, 991lb, and 1001lb. After this it was time for him to go for the big pull with a gigantic 1091lb deadlift.

After the monstrous deadlift, Brian Shaw discussed how smooth and easy the weight felt, which is mind boggling considering how heavy it was. Sure this was an 18-inch deadlift, which is something that other strongman athletes have been doing, but this is still just 6.2kg shy of the traditional deadlift world record. It shows just how hard he is grinding to get ready for the 2020 World’s Strongest Man.

“Definitely some more in the tank there for me,” Shaw said of the lift. “So I’m feeling great with this going into the World’s Strongest Man with this in the finals. Who knows who will make the finals, and what weight we’ll have to do but I’m excited for this event, definetly looking forward to it.”

How do you think Brian Shaw will do at the 2020 World’s Strongest Man? What events are you hoping to see at the event?