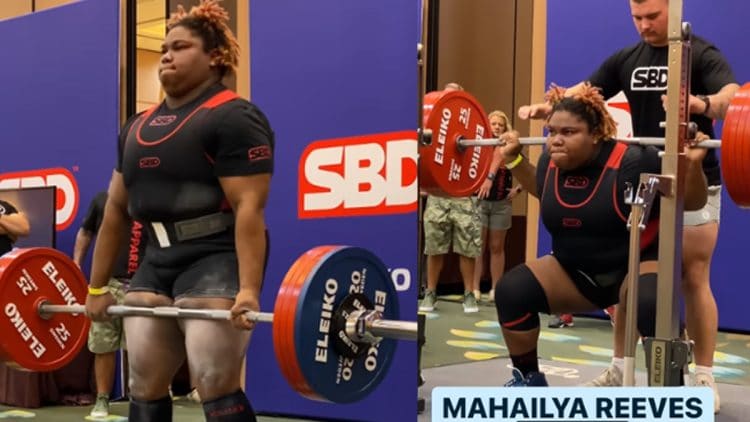 The 2022 Powerlifting America (AMP) Classic (Raw) Sub-Junior, Junior, and Master Nationals are taking place on June 18-19, 2022, in Orlando, FL. As the Powerlifting America federation (AMP) is an associate of the IPF for the USA, it serves as a way for athletes to prove themselves worthy of competing at the highest level. Day one of the AMP Nationals saw many powerlifters compete, but Mahailya Reeves’ display of strength was one of the most eye-catching. Mahailya competed in the raw +84-kilogram weight class and claimed the AMP Sub-Junior National Title.

Mahailya Reeves is only 18 years old, but she broke through on the main scene a few years ago, mostly due to her massive bench press lifts. This was the case once again, as Mahailya unofficially broke the +84-kilogram weight class Raw IPF Bench Press World Record. Her lift of 165-kilogram (363.8 pounds) is 2 kilograms (4.4 pounds) heavier than the current record which Mierger Amelie set at the 2022 IPF World Classic Powerlifting Championships.

Despite bench pressing more earlier in her career, Mahailya Reeves’ performance in this competition may have more meaningful significance. As she has taken part in a competition sanctioned by Powerlifting America (AMP), Mahailya will probably want to compete at an actual IPF competition where she will be able to break the World Record officially.

Mahailya Reeves weighed in at 138.37 kilograms (305.1 pounds) for the 2022 AMP Classic (Raw) Sub-Junior, Junior, and Master Nationals. So she competed in the over 84 kilograms weight class. Mahailya only claimed one competition PR, but her win in one of the greatest competitions makes her achievement even more significant.

*Mahailya Reeves has a competition PR squat of 245 kilograms (540.1 pounds) from the 2019 USAPL Raw Nationals.

You can watch Mahailya’s lifts here:

This was Mahailya Reeves’ 20th time competing in a sanctioned powerlifting competition. This is also her 18th victory, which is very impressive considering that she has only been competing for three years.

It seems that Mahailya Reeves could break some World Records in the near future. It is unclear what her next step will be, but we could see her compete at the 2022 IPF World Classic & Equipped Sub-Junior & Junior Powerlifting Championships, scheduled to be held in Istanbul, Turkey, between August 27 and September 4.