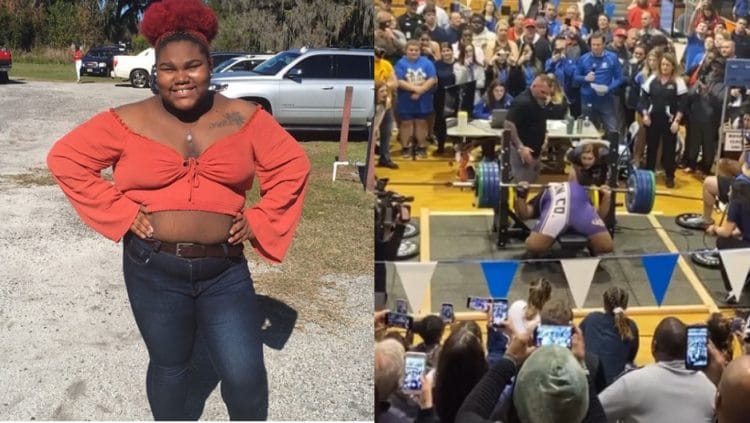 Mahailya Reeves may be a 16 year old high school sophomore, but she is not average. Instead, she is crushing giant bench press records like it is nothing.

Reeves is a 16 year old sophomore in high school, who resides in Florida. However, she is much more than just that, instead being an increasingly accomplished weightlifter. She has already begun making a name for herself with her impressive lifts Moreover, the fact that she holds several records in the state, continue to show that she is quite the promising phenom.

Nevertheless, Reeves is far from finished with impressing the masses. At a recent weightlifting meet, she was able to extend her state record with her bench press. She did this by crushing a giant 375lb bench press, extending the record that she set as a freshman by 15 pounds.

Check out a video of the incredible lift:

What is nearly as impressive as the lift, is the amount of people who gathered to see Reeves hit the lift. The people of Union County, Florida really seem invested in supporting their homegrown superstar in the making. This is a closer look at her accomplishing the lift, where you can clearly see the excitement on her face, as well as her coach’s.

16-year-old Union County weightlifter Mahailya Reeves lifts 375 pounds and breaks her own state record that she set last year as a freshman!!! How amazing is this?!?! @FHSAA @Mahailya3 pic.twitter.com/g9sU5zHegE

Reeves has been weightlifting since she was ten years old, immediately falling love with the process. Now, six years later she is just as hungry and motivated as ever. She is continuing to improve, and at this rate it will be amazing to see how far she can go. All the signs point to a long, amazing career for this young weightlifting phenom.

One thing is for certain, every time Mahailya Reeves steps up to the weights it seems like a sure thing that she will have a bright future.