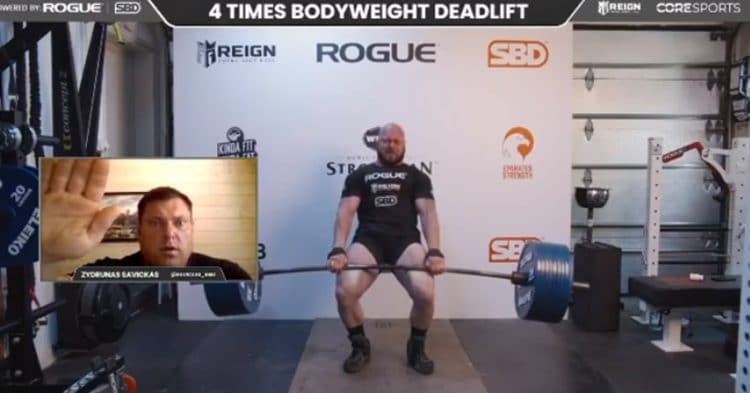 The World’s Ultimate Strongman Feats of Strength series featured many top strength sports athletes over several weeks who attempted world record lifts. Some were a success while others weren’t quite, although you have to respect what these athletes do nonetheless.

But there was one attempt left though to wrap up the season which involved a 4 times bodyweight deadlift by the creator of the World’s Ultimate Strongman, Mark Boyd, who also commentated throughout the series alongside Laurence Shahlaei.

He was also the 2018 Britain’s and Scotland’s Strongest Man under 105kg of which he also broke the deadlift world record in his weight class.

Boyd weighs 100kg/220lbs and attempted a 400kg/881lb deadlift today. Shahlaei explained that Boyd was lifting close to what himself and Brian Shaw lifted when the broke deadlift records many years ago which shows how elite he was/is in the deadlift. He was in Dubai for this attempt and even had the help of Larry Wheels to secure his lifting suit, of which the two actually train together over there.

Then it was time for the 400kg pull and it looked like he had it after pulling it above the knees however, he couldn’t get his hips to lockout at the top. He then called for some talcum powder to put on his legs before he attempted the weight again at -3:30.

Shahlaei explained that if he did this for the first attempt, the bar may have slid up his legs a little easier. But ultimately, Boyd failed the second attempt although he gave it a good effort.

After he explained, “It’s a little bit gutting“. “But I’m a big believer in practicing what you preach and today I sort of tried to put a show on and it was a bit unfortunate something that I can take away and work on but overall I’m happy that I did it.”

When asked what’s next for him, his response… “well, from seeing the full speed of this I definitely feel a little bit of work to be done on the lockout and the world record for the under 105kg is definitely achievable.”

In closing, he gave some advice to fans and aspiring Strongman athletes… “Anything that you do it’s all in the head, you need to put your head to it and if you believe you can achieve“.