6 reps was the number to hit for a new world record but both competitors, unfortunately came up short. 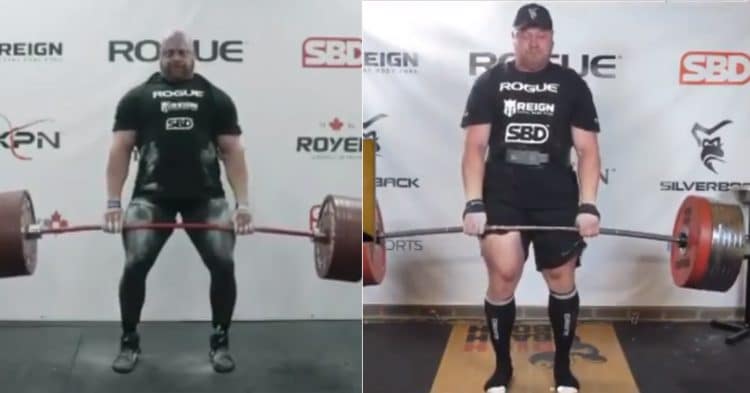 A week after Strongwoman elite Andrea Thompson broke and exceeded the women’s log lift world record with 135kg/297.7lbs, Strongmen J.F. Caron and Adam Bishop were pitted against each other in the 400kg/880lb deadlift for reps.

This is, of course, part of the World’s Ultimate Strongman Feats of Strength series that has already seen many top names in strength sports attempt a record. And due to the current health situation, these events have been streamed for free via Rogue and Coresports.

Also, both athletes attempted the world record from their own locations.

Now, Previously, Strongman athletes Rauno Heinla and Jerry Pritchett went head-to-head in this same event with the former prevailing victorious. Heinla was able to complete 5 reps in 75 seconds, while Pritchett managed to get 4 reps.

So the big question today was whether or not either of these behemoths would be capable of surpassing 5 reps. The Canadian J.F Caron has known to pull some big weight and as a matter of fact, he is the current record holder in this lift along with Heinla and Konstantine Janashia, having completed 5 reps in competition, according to commentator Laurence Shahlaei.

As for British Strongman Adam Bishop, he’s known to have deadlifted 440kg/970lbs.

Each competition performed several warm-up reps working up to 370kg apiece, to prepare for the 400kg for reps deadlift. They got the warm-up weights up without a problem and looked pretty good in the process.

So then, head ref Zydrunas Savickas had to verify that the weights were correct before they could start.

Bishop went up first and although the first several reps looked pretty smooth and even his fourth, a try for a fifth rep just wasn’t in the books for him. Although, he was able to get it above his knees before the weight began to pull him back down. He still had a little time left but the massive 400kg was just too much for him.

Next up was Caron, who struggled a bit with the third rep and this was even more so the case with the fourth. He took a short break and attempted a fifth rep but couldn’t get it and appeared to have pulled a muscle in the process.

So, after all was said and done, both competitors tied with 4 reps apiece, and consequently, the record of 5 reps still holds.

According to list of events provided by Coresports, this was the last for the Feats of Strength series. We saw so many amazing performances and world records that were broken since Hafthor Bjornsson broke the all-time deadlift world record on May 2.

But rest assured, many will be coming for these new records and we’ll be sure to provide the details.