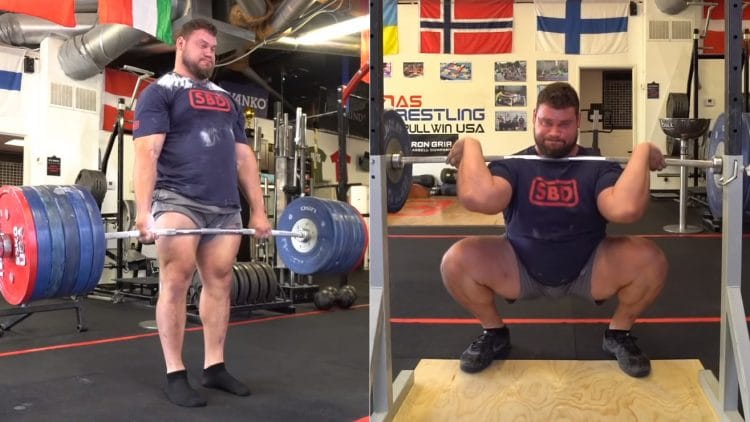 Martins Licis is having his best year yet, in 2019, winning the World’s Strongest Man competition and even placing second at the Arnold Strongman Classic. So now, Licis must work hard to maintain his position in the rankings, and that means enlisting the help of one of the best biomechanic coaches out there like the legendary Tom Delong, to ensure his front squat and deadlift form is on point.

But before they got into the training techniques, Licis wanted to take a moment and thank his dad for getting him off of the couch and into Strongman because he wouldn’t be where he is now, living such an amazing life and being on top in the sport of Strongman.

So first up was the front squat form corrections, where coach Tom Delong emphasized keeping the weight across the front delts with the elbows up and parallel to the floor. Keeping the elbows up will prevent the bar from falling forward and it’s safer for the back but it improves shoulder mobility. He wanted the barbell to situate between the hips and knees so the line of force is conducive to an erect trunk will work more of the erectors of the back.

You don’t want to round the back, as you want to maintain a stiff torso with a straight back. Delong explained that the front squat is very quad and glute dominant, whereas the hamstrings act more as a stabilizer.

So Licis added some weight and important points for proper form were that his feet were flat on the ground with knees pointed in the same direction as his toes (Slightly outward).

But it’s important to make adjustments according to several factors since everyone is different. Check the video for a complete front squat tips and information.

Now onto deadlift form, Delong talks about keeping the bar as close to the shins as possible (about an inch from the shins). This protects the lower back, keeps the weight closer to your center of gravity which means you can train heavier.

He emphasized keeping all the weight on the foot and keeping the head up rather than looking down. Then you’ll sit back and drag the weight up your shins for optimal performance.

You also don’t want to start the movement with your hips too low. Your Upper legs should be slightly above parallel for maximum force output. Feet should be just slightly wider than hip-width and chest should be up during the lift.

Martins Licis had to stop doing the deadlift due to some hamstring pain but he finished off with a single-leg pistol squat variation and some isolation work for his hamstrings in which he hated the contraption the exercise was performed on.

Here’s the video with some details below…

The video ended with a little bit of humor which stemmed from the beginning of the video where he found out that someone won $3 million from a video game (Fortnite) tournament.

“Yeah, that’s right dad, millions. He made millions playing video games, freaking video games. What am I doing, doing all this lifting stuff? it freaking hurts. My body hurts, I don’t even make millions.”

All in all, though, it seemed like the session was productive and Martins Licis will definitely be working on his form to improve his lifts.

Some of the biggest names in Strongman will clash in three weeks time in Barcelona at the European edition of...

Every now and then we see Strongman athletes attempting some pretty unconventional lifts, but this one might take the cake......