Martins Licis surpasses his previous record in the Steinborn squat! 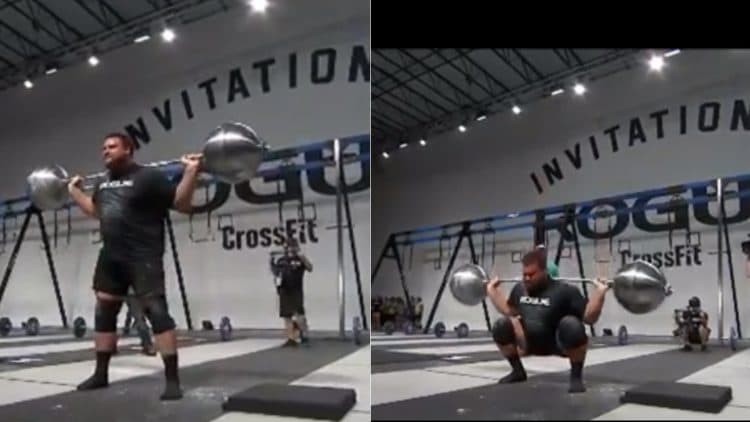 Every now and then we see Strongman athletes attempting some pretty unconventional lifts, but this one might take the cake…

The 2019 Arnold Strongman Classic runner-up Martins Licis was able to do something no one has ever done… and that’s to complete a Steinborn squat with 257kg/565lbs. Now, by the looks of the video, this lift would make anyone’s spine want to run and hide, but apparently, Licis began doing this movement to help rehab his spine.

But, he figured he was pretty good at it and tried to set a record in front of a large crowd of which he was successful! The Rogue Invitational in Columbus Ohio over the weekend was home to this new record, which surpassed the previous number Steinborn squat record of 254kg/560lbs set by Licis at the 2018 Arnold Sports Festival.

“NEW WORLD RECORD – 565lb (257kg)! – I originally started to use the Steinborn Rockover squat as a physical therapy exercise to rehabilitate my spine. It worked so well for me that now I’m setting World Records with it. (Please do not take that seriously. Do not use this to rehabilitate anything)”

Now, you’re probably wondering where the name comes from (And so were we)… but it turns out the Steinborn squat was named after accomplished German weightlifter Milo Steinborn, who’s best squat was a massive 533 pounds (Among many other impressive lifts). But here’s the catch… in the late 1800s, there were no high tech squat racks to unrack the barbell in order to perform the lift.

So, Steinborn had to lift the barbell and place it on his back just as Licis did to set the World record. This is no easy feat and would most certainly cause serious damage to the average person.

Congratulations to Martins Licis for setting a new World record in the Steinborn squat and who knows… we may see him attempt to beat this record sometime in the near future.

Some of the biggest names in Strongman will clash in three weeks time in Barcelona at the European edition of...

Martins Licis is having his best year yet, in 2019, winning the World's Strongest Man competition and even placing second...