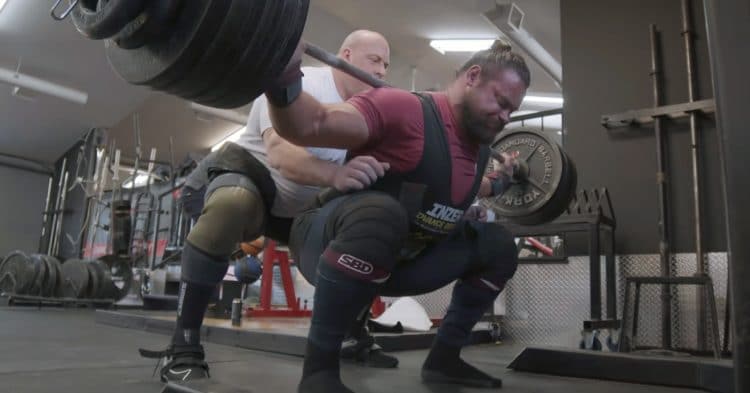 Caron and Licis are preparing to compete at the Arnold Strongman Classic that will take place from March 3rd to 6th in Columbus, Ohio. The event last took place in 2020. Hafthor Bjornsson emerged as the last winner of the contest as it was canceled in 2021 due to Covid-19 imposed restrictions. The strongman duo is currently training together at JF Caron’s gym located 20km north of Quebec city in Canada. The multi-part video series of their collaborative training is being posted on Martins Licis’ YouTube channel. Martins Licis started the day with a hefty breakfast to fuel his body through the intense squat training.

“We were going to be doing front squats, back squats and deadlifts in between the squats. That takes a lot of energy bringing a lot of squats up. So I’m going to increase Martins’ eggs intake from eight to ten today, double the bacon, we got spinach going on and roasted potatoes.”

After breakfast, Martins Licis and his team headed over to JF Caron’s gym equipped with a monolith, circus dumbbells, powerlifting benches, and everything else that one can need. JF Caron and Martins Licis then went through the workout throughout the video and shared some valuable insights into their training as the workout progressed.

JF Caron and Martins Licis started the leg workout with back squats. JF Caron began the squats with single plates and slowly progressed to heavier weights and more plates. Eventually, the duo worked their up to 700lbs for the last set. When asked the reason for starting so light, JF Caron shared the logic and added that a lifter is prone to injuries while lifting lighter weights as well.

“Because you’re cold and knees… That’s why I do all the time two-three sets with one plate to start. But for me also, like Martins, last set was the easiest because it is serious weight so you prepare. You think it’s heavy, you have to push. Sometimes injuries happen in small weights because you’re not so tight,” JF Caron stated.

As JF Caron started the first set of front squats, with a single plate again, Martins Licis said that front squats are especially important for strongman events like a stone to shoulder and log press. Licis and JF Caron went on to perform a few sets of front squats and the latter stated that he has never stopped doing squats and deadlifts in his entire career.

“… Because I do not consider squat and deadlift as strongman events. It is the basic movement of training. It’s always in my training,” JF Caron stated.

Martins Licis and JF Caron worked their way up to 550lbs for the last and the heaviest set of front squats before moving on to deadlifts.

The duo concluded the workout with four deadlift sets each of three reps with progressive overload. However, they ended the day with burnout supersets of leg press, lunges, and leg curls. After a long day of heavy compound lifts, Martins Licis said:

“I remember in my early 20s, I was able to handle giant leg workouts like this myself. But have lately needed to pull back to preserve my hips and knees. JF however, hits legs to this capacity twice a week, which truly is a great testament to his might and longevity.”

The video concluded as JF Caron prepared a post-workout protein shake for Martins Licis and the duo proceeded to the hot and cold bath for recovery.