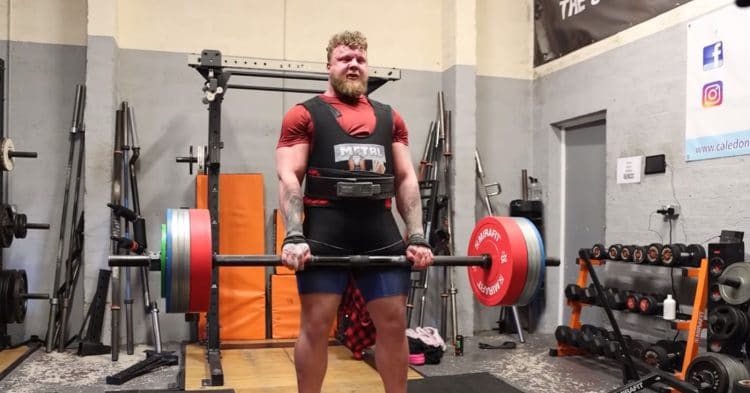 The Stoltman brothers will make their Arnold Strongman Classic debut at the 2022 Arnold Sports Festival and the preparations are underway to leave their mark in the competition. The video of their deadlift day was shared on the Stoltman Brothers YouTube channel.

Luke and Tom Stoltman are joined by Dr. Dan Managi of The Strength Game for a week to assess and guide them through the training. Unlike many other athletes, Tom explained that he prefers having him physically present rather than connecting virtually for effective communication.

At the beginning of the workout, Dan Managi instructed them both to start with less weight for the first couple of reps and work their way up to heavier reps as the goal was to get the full eight reps in. Managi shed light on what he expected from the entire week of work and said:

“Just nailing a few bits of technique, anything we need to work on. But the main thing is just getting a good idea of where we are in training as we enter the last five-six weeks till the Brits and the Arnold and stuff like that.”

Luke Stoltman completed two reps with 90kg (198lbs) to get things started and Tom Stoltman followed the suite with three reps of his own. They performed the next couple of sets with incrementally heavyweights from 190kg (418lbs) to 240kg (529lbs) wearing the deadlift suit. Dan Managi explained the benefits of the suit and said:

“A suit wants to be stood up. So when you get to the bottom of a bar, it’s really compressed. So, the suit gives you a bit of a pop. It keeps your hips tight as well and keeps everything warm.”

After deadlifting 280kg (617lbs) for two reps each, the Stoltman brothers proceeded to perform the top working set of 300kg (661.3lbs) for eight reps.

“We have deadlifts for reps and axle at Britain’s Strongest Man. The thing with us a lot I guess is the endurance aspect which I kind of struggled a lot before. So if I am getting, both Tom and I are getting kind of eight to ten reps plus…” Luke Stoltman stated.

“Well, the first six was pretty quick. Let’s go in the right progression. So I’m really happy actually how the training is going at the moment. I feel very positive, which is nice.” Luke Stoltman said after the first working set.

The Stoltman brothers next performed five sets of three reps of box jumps. Dan Managi explained the logic behind the workout and said:

“Three is a really good number to do with any plyometric exercise. It sort of means that you’re getting enough reps into work but you’re not getting too many reps so you sort of drop off being explosive anymore. We’re focusing on landing as tall as possible rather than tucking your feet up really high. Like not really jumping that high. The focus is moving like the hips or the head as high as possible rather than the height of the box.”

Managi further stated that this allowed Luke to step down relatively smoothly and did not interfere with the patella tendon inflammation that he has.

The unique exercise tends to isolate the back muscle. Dan Managi explained the benefits of it and said:

For this workout, Luke and Tom Stoltman focused on pulling the resistance band down while keeping the elbow straight. Managi clarified that this technique helps put pressure on the back muscles rather than the triceps, which usually tends to happen when the user allows the arm to bend while pulling the band down.

“And with the band, you get more tension, sort of a peak contraction as well,” Dan Managi explained.

Stoltman brothers chose the high-rep workout due to its safety aspect compared to Kroc rows which work for similar muscle groups. Dan Managi explained that if the form breaks during the Kroc rows, it can put the lower back at risk. On the other hand, chest-supported plate-loaded rows allow for a greater range of motion while significantly reducing the risk of injury.

“This is a nice safe piece of kit that can get loads of weight on it, do way too many reps and get a good pump as well,” Dan Managi explained.

The Stoltman brothers concluded the workout with this core exercise. Dan Managi explained that this is one of the best core exercises especially for the strongman sport and added that it trains the entire core through the hip flexors as well. Tom and Luke Stoltman added weight plates on their extremities to get the extra work.

Courtesy of the Stoltman Brothers YouTube channel, you can watch the full workout video here: