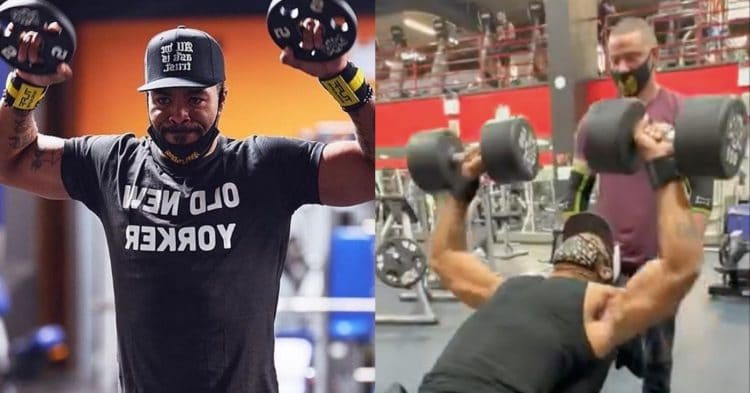 At 50 years of age, Wu-Tang Clan member Method Man has really made fitness a priority in his life. The results of this were evident when he hit the gym recently to score some massive dumbbell press sets.

Real name Clifford Smith Jr., the New York born rapper made a name for himself touring the world with the highly popular rap group. However in recent times he has been making waves as inspiration on the fitness side of the social media world.

This was recently seen again, when he posted to Instagram with an attempt to give some inspiration to those who might not be feeling like hitting the gym today. Here the East Coast rapper could be seen doing some incline dumbbell presses, with 100lb in each arm, for a strong 12 reps.

This workout gave a clear look at the impressive conditioning that Smith is in, especially for someone his age. He blasted out those reps with ease, showing strength and cardio that serves the purpose of inspiration that he sought after.

This is not the only workout that Method Man has been doing with the dumbbells either, keeping up the work with another session that he posted a few days earlier. In this session though, he dropped the weights down to 25lb instead of the hefty 100lb that he did before.

This workout saw Method running through some seated hammer curls, with eleven reps being posted with the video. Here you can get a good glimpse at his strong arms and developed triceps while he bangs out each rep with these dumbbells.

“can ya guess what day it is ? who grabbed these unc shorts !?!” Method Man wrote.

While these workouts sessions are being done with the dumbbells, most of the time Smith hits the gym he is doing the type of workouts that you often see from powerlifters. He has been known to not only rock out some heavy deadlift PRs, and showing off his incredible physique on a regular basis.

These workout updates from Method Man show that it is never too late for anybody to pick up fitness, and make it a critical part of their lifestyle. He seeks out to provide inspiration and motivation for his fans around the world, and with workouts like this, he is successful.

Method Man, real name Clifford Smith Jr., is widely respected as one of the most influential rappers of all time....