The boxing legends put on an awesome show in their exhibition boxing matchup. 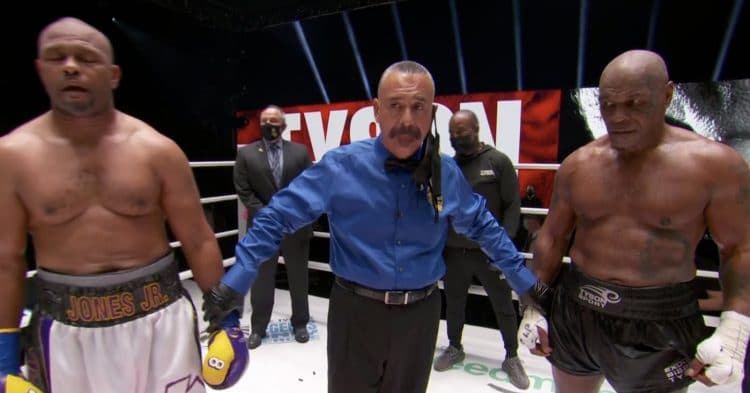 Few things in life are more exciting than anticipating and watching two former boxing icons go head-to-head (or blow for blow) several years past their primes, although they’re still both in amazing shape.

Earlier in the year, Mike Tyson (54) announced that he was planning to return to boxing in exhibitions, of which he’d participated in following his retirement, and he drew lots of attention in the process. A trilogy with Evander Holyfield, who he’s 0-2 against, was a possibility. But Roy Jones Jr. (51) stepped up and it was an instant dream match-up scenario as the two had never faced each other in the ring.

However, it was set up as an exhibition (sparring) match for charity called the “Frontline Battle,” sanctioned by the California State Athletic Commission (CSAC). So, this matchup was intended for entertainment rather than competition.

Consequently, no winner was “announced” even though the bout was for the WBC Frontline Battle heavyweight belt as part of Tyson’s League of Legends series of events.

The legends went for eight rounds but it was clear they didn’t try to land knockout blows, but some tough body shots were thrown, although nothing close to what they were capable of.

Tyson was hurling some serious punches while going after Roy Jones Jr. from early on. ‘Iron’ Mike was continued to punish Jones Jr. until the final bell. After the conclusion of the fight, Roy Jones Jr. wasn’t ready to declare that he’ll return to the boxing ring again but Tyson was quick to announce “we gotta do this again.”

The pay-per-view event took place at the Staples Center in Los Angeles, California with a start time of 9 P.M. EST. There were also no fans in attendance due to the Covid-19 situation.

Tyson vs. Jones was the headliner for the evening as there were several other matchups scheduled as well; including the co-main event between YouTube star Jake Paul and former NBA star Nate Robinson, who had some back and forth on social media – which ended in a brutal knockout win for Paul.

All-in-all, it was a fun day of matchups, not to mention the celebrity appearances were pretty cool with Snoop Dogg and more.

The WBC scores it a draw for Mike Tyson and Roy Jones Jr. #TysonJones pic.twitter.com/1HHP7usgnB