Mitchell Hooper won four out of the five events to win the title. 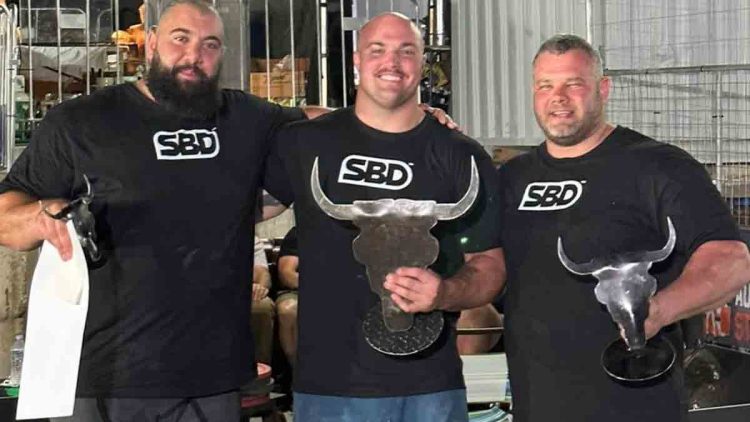 The 2023 Australia’s Strongest International competition took place on January 21st, 2022, in Yapeen, Australia. It gathered Strongman athletes from all around the world, which included the young sensation, Mitchell Hooper, who ended up winning the show. In doing so, he had to beat some other big names, like the Masters Deadlift World Record holder, Rauno Heinla. On the other hand, Shayna Wirihana came out victorious in the Strongwoman division.

“A good start to 2023, with 4 consecutive event wins to start the day and a token event 5 attempt to seal the deal.
Today I was good. Not great. We’re just starting to heat up” wrote Hooper.

The Strongwoman division of the 2023 Australia’s Strongest International was no less entertaining than the Strongman, as the podium finishers were decided in the final moments of the competition. Shayna Wirihana placed first overall after one event win and extremely solid results in all other events. Andrea Thompson was her biggest threat, being just half a point behind Shayna going into the final event. However, Andrea’s did not managed to outperform shayna in the Max Weight Atlas Stone and settled for second-place.

Note: Strongwoman athletes took part in the same five events: The Machine, Log Lift, Ukrainian Deadlift, Quest Stone, and Atlas Stone. However, the weight of their implements was adjusted accordingly.

Event One — The Machine

The 2023 Australia’s Strongest International kicked off with ‘The Machine’ event, which was basically a vertical lift. The participants had to tug a rope which moved the stack of weight higher and higher with each pull. The goal was to get that stack of weight to the top of the machine in the quickest time possible.

Mitchell Hooper wasted no time and made it clear that he came to Australia to win the competition. His time of 17.12 seconds was almost ten seconds faster than the next fastest competitor, which was El Masri. Faapoi finished another two seconds behind him, getting the third-place in event one.

Athletes had to warm-up their shoulders for the second event of the day, as the Log Lift was on schedule. Each participant had three attempts to establish the maximum weight of their Log Lift.

Mitchell Hooper got his second consecutive event win, but he had to share the top spot with Coraboeuf. Both men lifted 185 kilograms (407.9 pounds), as Hooper was not successful in his heavier third attempt. Rauno Heinla got third with a 172.5-kilogram (380.3-pound) Log Lift.

Ukrainian Deadlift is a complex variation that requires a specific setup in order to be successful. Once everything has been set up properly, the deadlifter performs a deficit deadlift with a much narrower grip than usual. The weight of the Ukrainian Deadlift at the 2023 Australia’s Strongest International started at 300 kilograms (661.4 pounds), but 10 kilograms (22 pounds) were added with each rep. The goal was to do as many reps as possible.

Mitchell Hooper looked like he could have done more reps, but having gone last, he knew that six reps were enough to win the event. Finishing in second was Rauno Heinla, who performed five reps, while Coraboeuf and Faapoi shared the points for third-place with four reps each.

Quest Stone is an oddly shaped boulder which had to be picked up and carried for maximum distance. The weight of the stone is currently not clear, but this made for the penultimate event of the 2023 Australia’s Strongest International.

Known for his speed, Mitchell Hooper quickly covered a lot of ground and ended up dropping the stone at approximately the 41 meter mark. Rauno Heinla was once agin the closest to Hooper, doing just 3 meters less than him. El Masri had an amazing performance, almost getting to 30 meters, which secured him a third-place in this event.

Although the 2023 Australia’s Strongest International wrapped up with Atlas Stones like many other Strongman competitions, it had a bit of a twist. It was not a race of multiple stones, but instead a matter of who could load the single heaviest stone.

Mitchell Hooper will now continue training at full capacity, since a big season is ahead of him. He wants to make history and is capable of doing that. His win at the 2023 Australia’s Strongest International might also boost his confidence ahead of his next challenge.