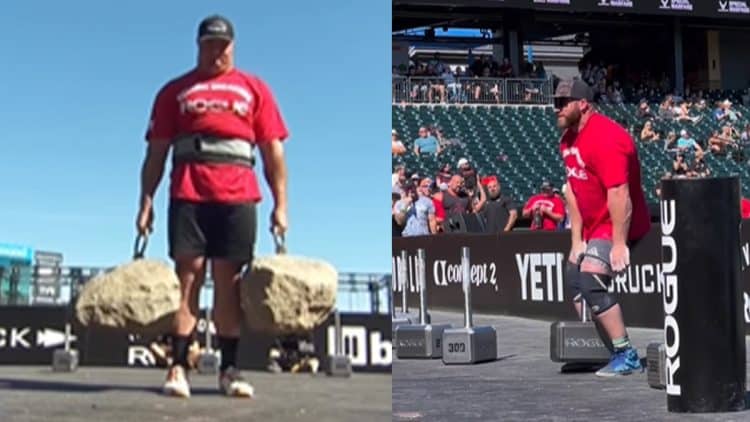 The 2022 Rogue Invitational has been one of the most exciting editions in years, particularly in the Strongman category. Oleksii Novikov won the overall show, but the Record Breakers event saw Mitchell Hooper and Kevin Faires set new World Records. This event was held on October 30th at the Dell Diamond Stadium in Austin, Texas.

Following up on his bronze medal from the 2022 Rogue Strongman Invitational, Mitchell Hooper also added a new World Record to his list of achievements. In the Rogue Replica Dinnie Stone Hold event, he set a new record, holding the legendary stones for 39.85 seconds. The stones weighed 732 pounds (332 kilograms) in total, while Mitchell had to hold on to the awkward hand-slitting rings. He used a hook grip to accomplish this World Record.

Kevin Faires definitely did not have his most desired weekend, having finished in last place at the 2022 Rogue Strongman Invitational contest. However, he managed to set things straight on the last day of this fitness festival, having scored a brand new Thor’s Hammer Deadlift World Record.

Kevin Faires moved up the implements slowly and ended up deadlifting a 325-pound (147.4-kilogram) Thor’s Hammer to set a new mark. He has displayed his grip strength on multiple occasions, but this is by far his most impressive achievement.

Martins Licis previously held the record having lifted a 300-pound (136-kilogram) Thor’s Hammer at the 2021 Rogue Invitational. Many believed that it would not be broken for a considerable period of time, but that was clearly incorrect.

Kevin Faires is often recognized for setting World Records, having previously set new marks in a range of grip-based events. However, the Dinnie Stone Hold World Record is something brand new for Canada’s Mitchell Hooper, who only started competing professionally as a Strongman in May of this year. Seeing that he has already gotten two wins and six podiums in major competitions, Mitchell definitely has a bright future ahead of him.

Hafthor Bjornsson also made an appearance at the 2022 Rogue Invitational Record Breakers, as he aimed to further improve his own 3-year-old Weight Over Bar World Record. He was successful in doing so, having thrown a 56-pound implement over a bar 20-feet and 3-inches high. So, three events were on the repertoire for this Record Breakers event, and all of them were claimed by different athletes. This is why the 2022 Rogue Invitational was projected to be one of the greatest Strongman shows this year.