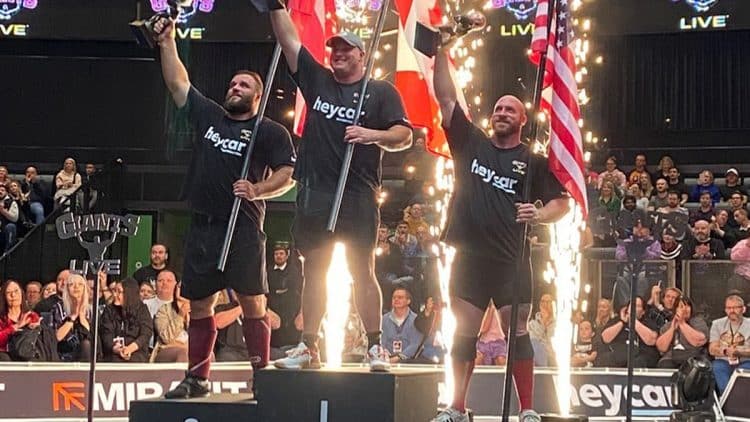 In what was one of the final major Strongman competitions of the year, the 2022 Giants Live World Tour Finals attracted a huge audience on October 8th at the OVO Hydro venue in Glasgow. There were five events in the one-day competition that were carefully selected to test the skills of the 12 competitors. In the end, the Canadian representative, Mitchell Hooper turned out to be the best on the day, which earned him the victory.

One event victory and some consistent performances in the other four events were enough for Mitchell Hooper to win gold. Hooper, who is coming off a victory at the 2022 Arnold Strongman Classic UK, definitely seemed like the most complete athlete in the show, despite competing against some of the best Strongmen in the World. Aivars Šmaukstelis grabbed a hold of the silver medal due to victories in the final two events. This disrupted Kevin Faires a bit, but he still only fell down to the third-place position.

The 2022 Giants Live World Tour Finals started with a very tricky event, but also one that goes way back in the history of Strongman. The Nicol Stones Carry is one of the harder events that a competitor could encounter, because it requires activation from many muscle groups. One stone weighed 114 kilograms (251.3 pounds), while the other one came out to 139 kilograms (306.4 pounds). This made the balancing even more difficult.

Seeing that he holds the Dinnie Stones Replica World Record, Kevin Faires was the favorite in this event. However, he managed to do more than just win, as he now also broke the Dinnie Stone World Record. Mitchell Hooper and Andy Black were not too far away from catching up to him, but fell short by just a few centimeters.

The second event of the 2022 Giants Live World Tour Finals was the Carry and Drag, which included a 125-kilogram (275.5-pound) anchor and a 350-kilogram (771.6-pound) chain. As a first step, the competitors had to carry the anchor for a distance of 40 meters. At the same place where the anchor was dropped, they picked up the chain and returned it to the starting point. The time limit was 60 seconds.

Mitchell Hooper once again displayed his incredible quickness, which seems to be one of his greatest attributes. He won the max points, having accumulated almost a one-second lead ahead of Pavlo Kordiyaka, and an even more significant lead against the third-place finisher Kevin Faires.

Historically, the deadlift has been one of the greatest tests of strength since Strongman began, so the 2022 Giants Live World Tour Final did not hesitate to feature it as well. It happened to be an Axle bar deadlift for reps. The weight was predetermined to be 350 kilograms (771.6 pounds), while the time limit for locking out as many reps as possible was 60 seconds.

A surprising performance saw Pavlo Nakonechnyy win this event with 11 repetitions. Pavlo had a slower start to the 2022 Giants Live World Tour Finals than expected, but a sudden surge of energy gave him the ability to beat everyone on the deadlifts. Even the Masters’ Deadlift World Record Holder, Rauno Heinla, who finished in second. Mitchell Hooper did not fall behind, as he placed third.

The absence of Oleksii Novikov from the 2022 Giants Live World Tour Finals meant that the Dumbell Press could bring some change-ups to the leaderboards just before the final event. The dumbbell weighed 100 kilograms (220 pounds) and the time limit for completing as many reps as possible was 60 seconds.

Aivars Šmaukstelis and Pavlo Kordiyaka tried to edge each other out with one final rep, but both capped out at seven repetitions and shared the points. Mitchell Hooper was not able to join in on the point-sharing, but was still satisfied with yet another third-place finish.

Contrary to the Strongman standard, the Atlas Stones were not the final event of the 2022 Giants Live World Tour Finals. Instead, the last obstacle for the competitors was the Power Stairs. There were five implements ranging from 200 kilograms (440 pounds) to 250 kilograms (551 pounds), each of which had to be carried up three stairs. So, the competitors were required to climb up 15 stairs in a faster time than the others to claim the max points. The time cap was once again 60 seconds.

The majority of athletes managed to complete all 15 stairs, but Aivars Šmaukstelis did so in just over 30 seconds and claimed 12 points. Pavlo Nakonechnyy also had an impressive finish to the competition, but it was too late to secure a podium finish.

Although Mitchell Hooper hasn’t competed in Strongman for long, he already has two competition victories. Apart from that, Mitchell also got two silver medals and one bronze medal out of his remaining four appearances. The only competition he failed to stand on the podium was the 2022 World’s Strongest Man, which was still very impressive since he finished 8th in what was his Strongman debut.