One new study shows better overall muscle activation for the bench press with the hips and knees elevated. 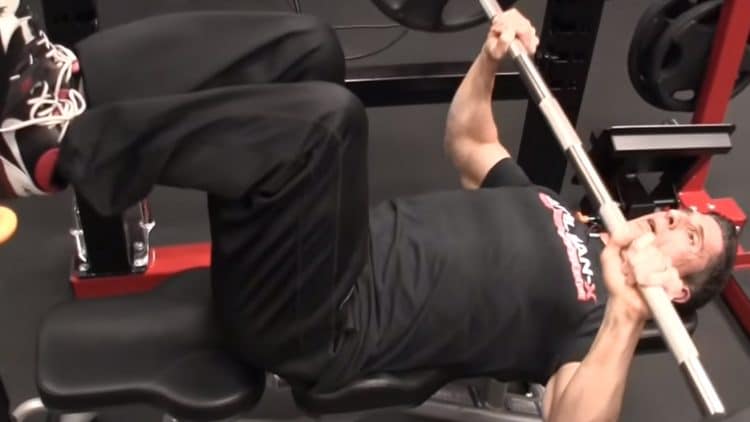 There are always new research studies coming out regarding exercise science. But there was a very recent one which may be the most surprising of them all…

A study published by the PLOS ONE Journal had twenty experienced young men perform the conventional bench press with their feet on the ground and with their feet elevated so that their hips were active and their knees were bent at a 90-degree angle.

And in order to determine muscle activity differences between the two exercise variations, researchers used electromyographic (EMG) testing which utilizes electrodes that can measure this activity.

Well get this… not only did the elevated version show better muscle activation. But it resulted in significantly more muscle activation of all elevated muscles during the bench press exercise (yes, you read correctly). And to boot, the pectoralis major (largest chest muscle) which is the main target muscle during the movement; showed the most muscle activation, followed by the front deltoids, and then the triceps.

The forearms, external obliques, rectus femoris, and core muscles were also activated more with this variation due to the additional stabilization as a result of hip and knee flexion.

To be sure that all variables were equal among the 20 volunteers in order to assess an accurate one-rep max for the study, each male was guided through the same warmups, stretches, and familiarization (proper technique) of both variations of the bench press being tested.

And then, to determine the most accurate one-rep max, each volunteer was allowed three attempts with the same rest time in between sets. After the one-rep max was determined, the twenty men were told not to lift or exert themselves for 48 hours.

Then, the 20 male volunteers were split up so that half did the conventional bench press and half performed the exercise with feet elevated, to be fair.

Finally, the volunteers performed 8 reps of the bench press using 60% of their one-rep max at a tempo of 2:2 (2-second eccentric and 2-second concentric) to determine the results.

But there are a few things to note about this study before a conclusion can be definitively made; even though, it’s clearly evident that the flexed hip and knee position elicits significant muscle activation during the bench press.

So, firstly, this is supposedly the only study which compares the two bench press variations. Therefore, there is no other scientific literature to compare it to, where all variables are equal. But we know the exercise was performed properly for both variations since the chest was the main muscle group activated for both circumstances; which is accurate of what we know regarding the main goal of the bench press.

Additionally, due to the instability from the feet on the ground, it’s pretty obvious that the muscles involved during the elevated variation must contract at a greater level to effectively execute the movement. So, there’s no debate there.

But according to the study from PLOS ONE, similar research has been conducted comparing abdominal muscle activation during stable and unstable conditions. And the results were different, as there was no notable difference found between the bench press whether stable or unstable.

However, the load used in this other study was 80% of the lifter’s one-rep max, and the exercise was performed on a Swiss ball with feet on the ground, which is much different than the 60% one-rep max (minimum recommended load for strength gains) load used on a flat bench with the feet elevated for the presently discussed study.

But there are a few concerns that come to mind if a higher resistance load were to be used in this new study which involves hip and knee flexion. And we’re unsure if even the 60% of one-rep max used was too much ffor the spine.

But one concern is overall safety due to the stability and balance requirements since the legs are elevated. And the other concern is that hip flexor activation is associated with excessive stress on the lumbar spine, which was also discussed in the PLUS ONE study.

So, of course, it’s highly recommended that advanced lifters only attempt the hip and knee flexed bench press variation if future studies include this variable.

And another factor to keep in mind is repetition tempo, as the hip and knee flexed variation was performed with a 2-second eccentric and 2-second concentric tempo. So, this too is a variable which should differ for future studies.

It’s difficult to say… On one hand, you cannot maximally overload a muscle using 60% of your one-rep max to induce optimal growth and strength if that’s what you’re after. Although, you can still make respectable gains. And using this flexed hip and knee variation can be beneficial for higher rep training to promote progressive overload through muscle exhaustion or explosive speed training even.

But on the other hand, there’s no long term evidence to conclude that this position is safe for the spine. And you certainly wouldn’t want to attempt this variation with relatively heavy weight loads knowing what we know about the potential for excessive lumbar spine stress when the hip flexors are activated.

And for athletes and anyone looking to get stronger, it’s best to keep the feet on the ground for maximum leg drive, balance and a more functional movement up through the kinetic chain.

So, we think it’s best to stick with the conventional bench press where the feet are on the ground for the most part until more long-term studies and research, in general, has been conducted on this variation.

But if you choose to try it, be mindful of the weight used and keep in mind that you’re doing so at you’re own risk!

A few rising stars in the sport of powerlifting have surprised everyone in recent times, but it seems like no...