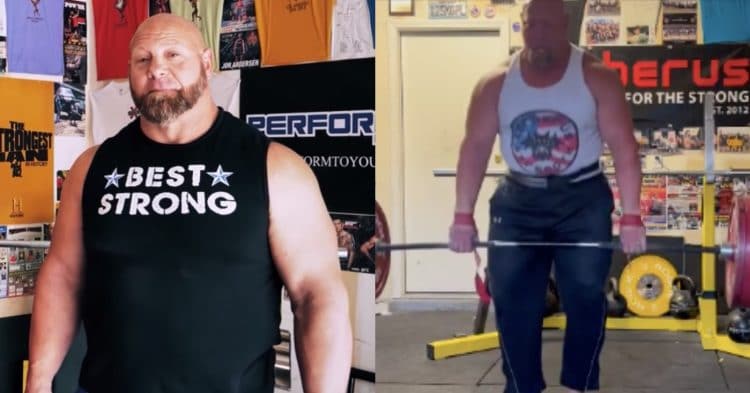 At 53 years old, Nick Best is still an active and competitive strongman. He showed recently that age is just a number, when he knocked out some crazy deadlift sets in the training room.

Best is, by far, one of the oldest strongmen to ever compete at the World’s Strongest Man, appearing as recently as 2020, when he was 52 years old. While he has only ever scored as high as 6th place at the WSM, he is always a threat on lifting events, with a background in powerlifting as well.

While it has been about 25 years since the last time Nick competed as a powerlifter, he still has some ridiculous skill on the barbell. He recently posted to his Instagram with a video that shows the 53 year old performing an age defying round of 500lb deadlifts, done for a total of 50 reps, broken down into 5 sets of 10 reps each.

This impressive round of deadlifts from Nick Best came just a few days after his birthday, and it is clear that he is not slowing down, even well into his fifties. He is showing some of the most insane longevity you will ever see in a sport like strongman that can be unbearably taxing on the body.

Of course, he spent his birthday in the right way too, going through a back day workout that would be difficult for people half his age. He posted some of it to social media as well, and it seems that he is actually somehow working to make gains.

The skill level and amount of power that Nick Best still manages to posses is enough to make any 53 year old jealous to watch. To be clear, this is not a particularly old age by any means, but it is not often that you see people who have been walking the Earth for more than half a decade, being able to string together this type of work in the gym, and still make some gains.

REPORT: Bodybuilder Victor Richards NOT Dead, He is ‘Alive and Well’