Final results and standings from the 2020 World's Strongest Man; see who won this year's event 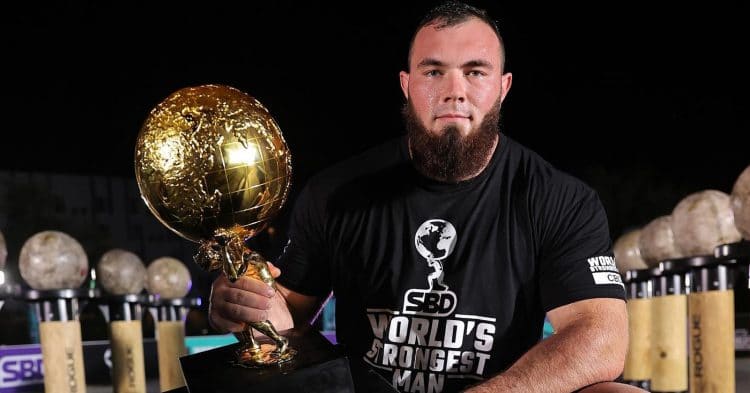 The 2020 World’s Strongest Man is wrapping up this Sunday, with the final three events of the contest. This is the results of that event, as well as who has been crowned this year’s winner.

This year’s WSM has been a tough one, but an exciting one nonetheless. Several athletes have been injured along the way, but we have also seen some world records set along the way. After four days of grueling competition, we are down to the final three events, where the Strongest Man will be crowned by the day’s end.

This year’s contest saw several notable names sitting out, including 2019 winner Martins Licis. Therefore we knew that we would be seeing a new champion crowned in his absence. Oleksii Novikov would fill these shoes nicely, winning the 2020 World’s Strongest Man after setting a world record earlier in the competition.

Here is a breakdown of the final day of World’s Strongest Man competition:

*Hicks has withdrawn from the finals with a bicep injury

Don’t miss the 2020 @sbdapparel World’s Strongest Man on @CBSSportsNet (US) and @Channel5Sport (UK) in December. pic.twitter.com/uNDdM62Jhu

The first event of the final day of competition is the visually intriguing Hercules Hold. This tests athletes grip strength, as they hold two pillars up with their bare hands. The specs on this event are as follows:

Despite not qualifying for the Finals, it was revealed that Mark Felix would be attempting to score a new world record on the Hercules Hold. This is a record that he already holds in other contests, but he was looking to secure it on this particular apparatus. Unfortunately he was unable to accomplish this, lasting less than 50 seconds.

Next up in the Finals is an overhead Log Ladder event. This event goes as follows:

The final event of this year’s contest is the Atlas Stone event. Here is how this event goes down:

How to Watch 2020 World’s Strongest Man on TV

You can also watch the full 2020 World’s Strongest Man on TV, however you will have to wait until next month.

Stay tuned to Fitness Volt for more updates as the finals of the 2020 World’s Strongest Man conclude.