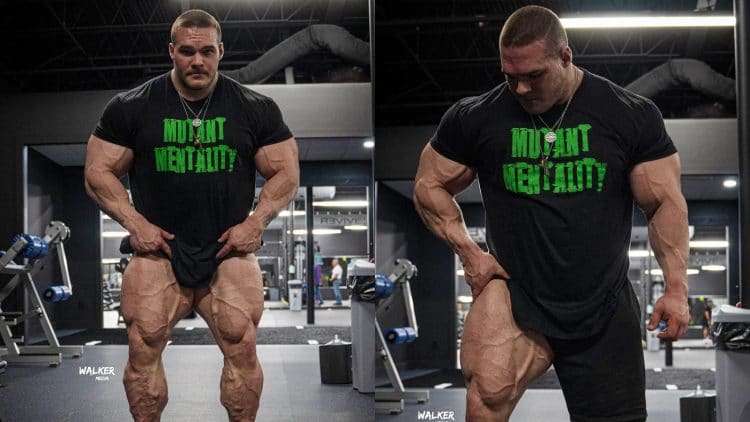 IFBB Pro bodybuilder Nick Walker has emerged as one of the brightest prospects in the open division within a year of earning his pro card. the 2021 Arnold Classic winner has kept himself busy during the off-season and believes that although progress can be achieved during the competitive preparation, real work happens during the off-season.  The 26-year-old recently shared his leg day workout on his YouTube channel on the occasion of reaching 100 thousand YouTube subscribers and shared some valuable insights as well.

Nick Walker earned his spot at the 2021 Mr. Olympia with a first-place finish at the 2021 New York Pro. While getting ready for the workout, Mutant stated that he never trained leg extensions in preparation for the event. Walker stressed that his knees got gradually better after abandoning leg extensions and advised those with knee pain to do the same. With that, Walker warmed up with walking lunges and bodyweight squats and kicked off the leg day.

Nick Walker performed 2 sets of 10 reps and 1 set of 20 reps with the goal to maintain the full range of motion. In addition to that, Walker performed the negative/eccentric phase of the reps at a slower pace. This way, muscles spend a long time under tension as compared to faster reps. Muscle growth tends to be faster as a result.

The technique seemed to have pushed Walker to the absolute limit as he said:

“Slow negative with a pause in the hold, I feel way more pain and way more pump in the muscle than you would if you were just trying to pump and have no control that way.”

Walker admitted that he would be able to get a lot more reps in with regular fast movements. However, the pump he gets with this technique is what makes it worth it.

Nick Walker next performed 2 sets of 6 to 8 reps with the full range of motion and 1 set of 10 partial and 10 full reps with heavier weights. He employed the similar technique of slow-motion during the eccentric/negative phase. While explaining the benefits of the machine, the 26-year-old stated that as opposed to the barbell squat or traditional bodyweight squat, the hack squat machine allows the user to increase the range of motion without jeopardizing the lower back during the eccentric phase.

Nick Walker then moved on to do the Body Masters hack squats. The machine is similar to the traditional hack squat machine but has handles closer to the waist level. Walker performed 3 sets of 15 to 20 reps on the machine to proceed for the finisher of the day.

Nick Walker advised staying away from leg extensions at the beginning of the video. However, he added that as long as it is the last exercise and doesn’t involve heavier weights, it can be a good workout. Walker went on to perform 2 sets of 15 reps and 1 set of 30 reps of leg extensions.

Nick Walker finished the workout with three sets of 15 reps each of standing calf raises.

“Overall good workout. I’m pumped, I’m f*cked, which is the idea. They want bigger legs, so that’s what’s going to happen,” Nick Walker said at the end of the workout.

Courtesy of Nick Walker’s YouTube channel, you can watch the full video of his leg day workout here: