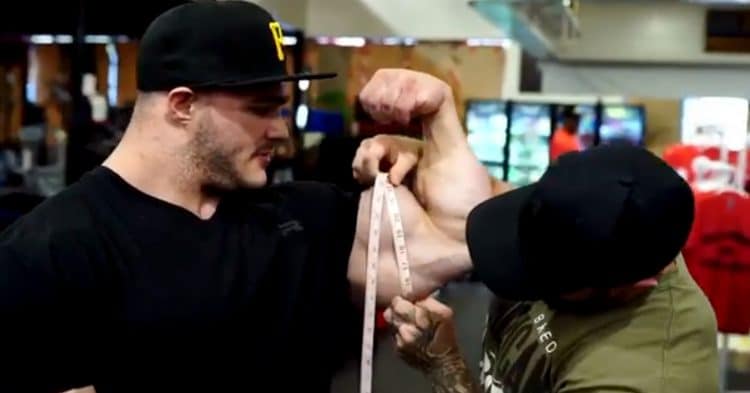 Despite not even being a pro yet, Nick Walker has gained a ton of attention for his insane biceps. He finally measured them, and the numbers are absolutely unbelievable.

Currently, Walker is considered to be the best NPC bodybuilder in the world. From the moment he stepped on stage, onlookers knew that there was special about this young athlete. He showed an impressive upper body, with his most noticable feature being the enormous peaks of his biceps. Immediately he got the attention of the fanbase, being targeted as a serious prospect.

Now, Nick Walker is preparing for the chance to earn his Pro Card at the North American Championships, in about three weeks. Leading up to the event, he has been working alongside Seth Feroce at Atilis Gym, and Nick decided to take this opportunity to properly measure his biceps. As he explains in a post to his Instagram, the “true measurement with no pump” turned out to be a whopping 22.75in!

“Had a great time hanging with @sethferoce at @atilisgymbellmawr.
You know we had to get him to get a true measurement of my arm size
UNPUMPED!!!!!
Just watch and see.”

This is some absolutely mind-blowing numbers from Walker. The size of his biceps rivals that of the likes of Jay Cutler and Ronnie Coleman in their primes. The fact that this was done with no pump, while not even being a pro, is unfathomable to say the least.

In addition to these awesome bicep measurements, Nick also gave a sneak peek of what can be expected in stage in a few weeks. Throwing up his favorite, the front double bicep, he gave fans a look at how his upper body is coming along for this prep. Already he is showing some good symmetry and definition.

The fact that Nick Walker is still so green in his career, and already showing this type of physique reiterates the concept that he is a person worth watching, moving forward. On the other hand, his legs have been notably a weak point for him, particularly with his calves. Hopefully he will be able to iron out these deficiencies, so his whole package can come together.