Ronnie Coleman Powers Through Arm Workout: “Still Working On Getting Those 21″ Biceps Back” 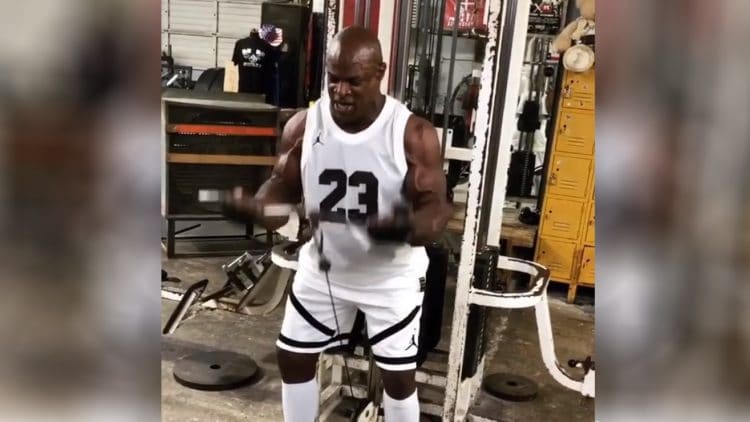 Ronnie Coleman has already reserved his spot on the Mount Rushmore of professional bodybuilding but he’s well into his retirement from the sport and at age 55, the 8x Mr. Olympia champion is more determined than ever to get into his best shape possible.

Coleman has had multiple spine surgeries and he’s obviously not able to train like he did before when he was at the top, but that’s not stopping him from having big ambitions.

Ronnie Coleman recently took to Instagram (as he has been plenty recently) with a video of him performing EZ bar cable curls, and the big man’s arms are looking pretty impressive as should be the case seeing as how dedicated he’s been since his return to the weight room earlier this year.

“Still working on getting those 21.126474 in biceps back but I wanted to let you all know the RCSS BLACK FRIDAY SALES ARE LIVE!!

Ronnie Coleman has been going hard for a while now and although he likely won’t get arms as big as when he ruled the Open bodybuilding division, it’s good to see him doing what he loves. But we’ll be sure to update you on his training progress as the legend continues to share his content with fans.

CrossFit Hands Out Penalties To Top 40 Athletes For Open 20.4 Workout

Rows and pull-ups getting a little redundant? If so, the London Bridge should definitely be on your radar. A powerful...

Bodybuilding legend Ronnie Coleman carried the sport during his career, which spanned from the 1990s to the mid-2000s. In a...