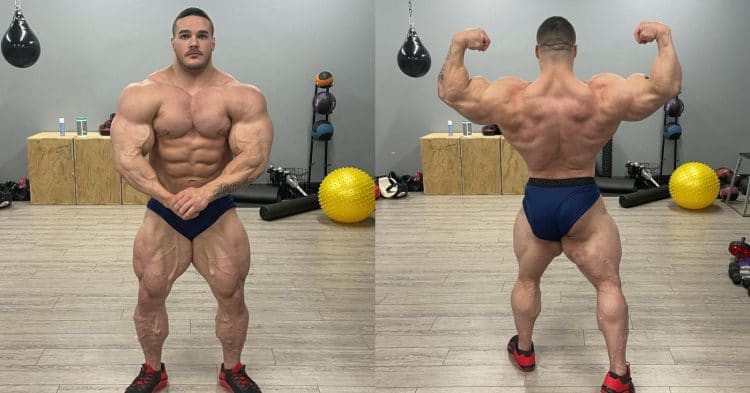 Heading into 2021, there is a ton of hype around Nick Walker, to see how he can perform. He is set to compete for the first time this year, and looks to have made some serious improvements in the offseason.

Even before he earned his Pro Card, people were looking at Walker as someone who could be the future of the sport. He is an absolute mass monster and still young, meaning he has plenty of time to get better.

Last September, Nick was able to secure that elusive Pro Card, something that many thought was long overdue. He then made a quick turnaround to compete at the Chicago Pro, where he debuted at an impressive fourth place.

Now Nick Walker is set to compete at the 2021 New York Pro, his first event of the year. Leading up to the contest, he has been sharing some glimpses into his prep, which show just how much he has improved since we last saw him in October.

The most recent update that Nick posted to his Instagram sees the 25-year old 14 weeks out from the contest. Here he can be seen hitting a few poses, giving a good look at the entirety of physique.

Now of course, we have to keep in mind that with any Instagram pictures you are only able to take them at face value. Typically athletes do not share the pictures that don’t look stellar.

That being said, Walker looks like an absolute beast here. He is certainly earning the nickname of the Mutant, and he has clearly been making some gains since his last competition.

This was not the only recent look at his physique that we got from Nick. Just a few days earlier, he hit some poses after doing his chest and arm workout, and with his pump in full effect, he looked like an absolute killer.

There is still a lot of work for Nick Walker to do, and he has plenty of time to do it, but so far things are looking solid from this young prospect. It will be interesting to see how he looks on stage at the New York Pro on May 15th.

There will be a ton of top level talents competing at this show, so it will be a good test for him. If he shines here, then he will have a strong case for being one of the best prospects in the sport right now.