Strongman turned boxer Hafthor Bjornsson is expecting to fight Eddie Hall two times, but is looking on to challenging himself against heavyweight champion Tyson Fury 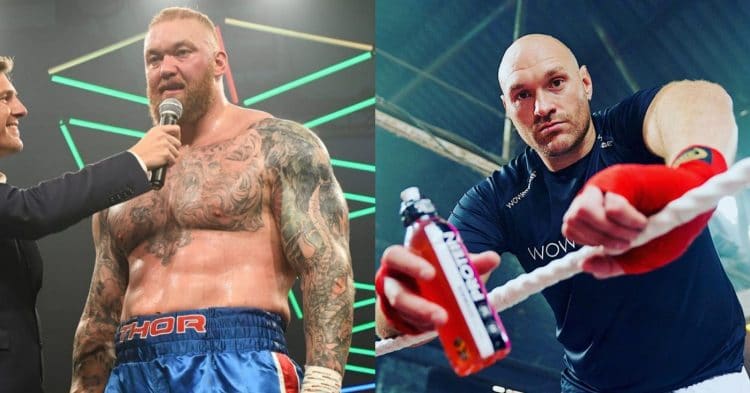 It is easy to brush off the boxing efforts of Hafthor Bjornsson as just being in preparation to fight Eddie Hall. However the Mountain has another opponent in mind after this, and it is not an easy task.

When Bjornsson revealed that he was retiring from strongman in order to focus on fighting Eddie Hall, fans were surprised. After all, the Icelandic champion was seemingly at the top of his game, having just scored the heaviest deadlift of all time.

Nevertheless, this is precisely what he has done, putting all of his focus into learning the craft of boxing. This has led to him losing a ton of weight, and even taking exhibition fights to better prepare himself.

However it seems that Bjornsson does not plan to stop after just one fight with Eddie Hall. Speaking in a recent interview, Thor explained that he plans to stick around in boxing long enough to have two fights with his rival, and maybe even longer.

“There’s probably going to be a rematch against Eddie Hall, so I’ll be in the sport for probably the next two years,” Thor said.

“After the rematch we’ll see how I feel, how much I have improved. I’m not getting any younger, I’m 32-years-old so I need to improve very fast if I see myself competing more.

“You never know, I was quite surprised how much I enjoyed myself in the ring, so I don’t want to say no because I’m just enjoying this journey so much now and having so much fun then maybe. If I make huge improvements then why not?”

Hafthor Bjornsson made it clear that he does not exactly plan on sticking around boxing just for random fights. If he keeps fighting, he wants it to be against some of the best in the world, namely WBC Heavyweight Champion Tyson Fury.

“If the right opportunity came along…Let’s say in the Eddie fight…obviously my plan is to knock him out, let’s say I knock him out the first and the second time and some big name says: ‘Who the f—k does he think he is? Thor, you’re nothing, I’m going to knock you out, I challenge you.’

“That could happen. No one has seen a guy my size before and imagine if some big name would challenge me because they want to shut me down. That would be a huge opportunity for me and I probably wouldn’t turn it down.

“When I do anything I always look at the top and the top right now is Tyson Fury obviously, but we’ll see in two years’ time who is on top then.”

What Hafthor Bjornsson Learned From Fighting

Before his fight with Eddie Hall, Hafthor Bjornsson decided it was in his best interests to take some exhibition fights, to get experience in the ring. The first of those came when he faced Steven Ward in January.

In the end, the bout would end in a draw, with Thor making a decent account of himself. That being said, he feels that he did not get to showcase all of stuff he has learned, and hopes that more fights will help him become more comfortable.

“What probably surprised me the most, not really surprised, but the thing I learned the most from the fight is that I just need some more training,’ Bjornsson said.

“There are things that you do in training that you can’t perform in a fight because I haven’t trained it enough. Just simple punches like one-two, one-one-two, straight forward punches. But I somehow wasn’t able to perform them because of stress or, I don’t know what it was.

“It’s a weird feeling, I don’t know how to describe, that’s why I wanted to do these exhibitions, to learn, get more experience and not make these mistakes when I fight in September.

“In the ring, you want it to become natural, that’s how it should be when you’re a professional fight. Your punches and everything should come natural to you, but it’s not there yet for me, I just need more time,” Bjornsson added.

“Steven Ward is a great athlete, been training boxing since he was 8 years old, I learned a lot from it and I can’t wait to do it again. I’m very happy with the decision I took to do this, you can’t get this experience from training, there’s no way.”

As for when his next exhibition match will be, Thor is hoping for it to take place in the early spring. However he does not have a specific opponent picked out just yet.

“I’m enjoying it, it’s a lot of fun and I just can’t wait to get back into the ring. Hopefully it will be sooner than later, hopefully in 10 weeks time. I’ll make a decision soon on an opponent.”

How do you think Hafthor Bjornsson would do in a boxing match against Tyson Fury? Who will win between he and Eddie Hall?