Noémie Allabert solidified herself as the greatest U52 women's powerlifter in France with multiple records. 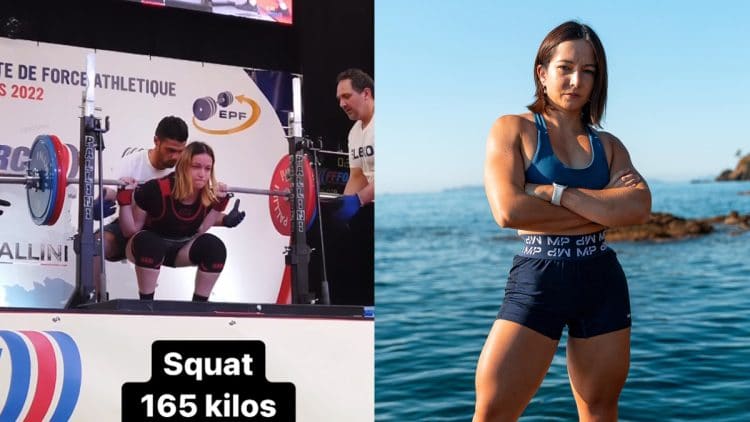 The reigning 2021 IPF World Champion, Noémie Allabert, just took part in her first competition this year, which was the 2022 FFForce French Nationals. The competition took place on March 19-20, in Albi, France. Noémie surprised everyone, as she put up an incredible performance and won the raw 52 kg weight class. Her performance was also record-breaking, as she claimed two French Records and two Unofficial IPF World Records in the squat and total events.

Noémie started the competition perfectly, having Unofficially broke the IPF World Record with a 165 kg (363.8 lbs) squat. This is 4 kg (8.8 lbs) heavier than the Current IPF World Record, which was set by Dekkers Pleun at the 2021 EPF European Classic Powerlifting Championships. In addition, this squat is the new Official French Record.

Following an impressive overall performance marked with new PRs, Noémie Allabert also Unofficially Broke the IPF Total World Record. The three of her lifts added up to 445 kg (981 lbs), which is 9 kg (19.8 lbs) heavier than the current record. In addition, the current IPF Total record was also set by Noémie at the 2021 EPF European Classic Powerlifting Championships.

You can watch all of Noémie’s lifts here:

Noémie Allabert’s bodyweight at the time of the competition was 51.89 kg (114.4 lbs). She also improved all of her PRs except the deadlift, which was just 1 kg (2.2 lbs) lighter than her competition PR.

Noémie Allabert is one of the greatest French powerlifters. She is 32-years-old and has made some amazing success throughout her 5-year long powerlifting career. Noémie has already taken part in 18 sanctioned competitions and won 10 of them.

Noémie Allabert is a 4x French National Champion, 3x European Champion, and an IPF World Champion. She also stood on the podium at multiple major competitions.

The next challenge for Noémie Allabert will be the 2022 IPF World Classic Powerlifting Championships, which will take place from June 6-12, 2022, in Sun City, South Africa. At this moment in time, Noémie looks like an absolute favorite for the win, and it seems like she will manage to defend her title.