Joey Swoll is calling attention to poor gym etiquette after a female TikToker tried to make an example out of a man who asked how many sets she had left. 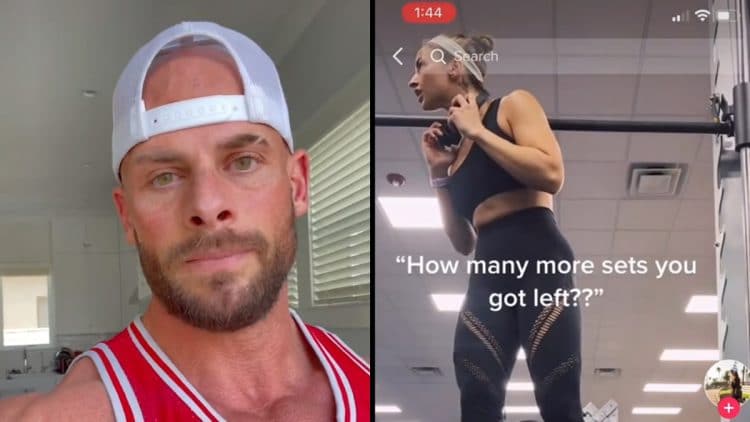 Fitness influencer Joey Swoll has been using social media as of late to spread awareness around what he perceives as toxic gym culture. In a recent video, Swoll addresses the ongoing problem and calls out a female TikToker who attempted to make an example out of a male gym-goer.

In the age of social media, public gyms have become a hotbed for conflict. With streaming platforms like TikTok available to anyone, anytime, moments of hostility and awkwardness have become all too common. Fitness influencers flock to the app in hopes of spreading their brand and knowledge with followers from all over the world.

Unfortunately, some TikTok users take it upon themselves to ridicule strangers and record them without consent. One such instance occurred months ago when a popular fitness personality, Nicki Fitness mocked a man at the gym who was practicing drag curls. After Joey Swoll explained the utility of the exercise, Nicki apologized publicly for shaming the man. These types of circumstances support Joey’s driving point, which is that gyms have been overwhelmed with bad etiquette.

In a recent TikTok video, Joey Swoll condemns the woman after she explains that her biggest pet peeve is when people ask for her gym equipment before she’s finished.

“Treat others in the gym with kindness and respect or stay home.”

“This man did nothing wrong. There is absolutely nothing wrong with somebody asking you politely, how many sets you have left. This man was trying to get your attention, you were setting up your camera, and you hadn’t started your set yet. He went as far as to even say, ‘I’m sorry for bothering you’.

The only bad gym etiquette in here is you. People ask me all the time how many sets I have left. I go as far as saying, ‘would you like to work out with me?’ You don’t have to do that, but you need to respect people, it’s a shared space. You don’t own the gym. Your name is not on it. Until it is, I suggest you mind your own business. Be better than that.” Joey Swoll shared.

Treat others in the gym with kindness and respect or stay home. #MYOB

Swoll believes the woman is out of line for smirking, giving attitude, and posting the man on the internet to be made an example out of. In a previous TikTok video recorded by Swoll, he addresses the ongoing issue with recording people at the gym. While it’s hard to avoid recording at the gym nowadays, Joey is adamant that respect goes a long way.

With 3.4 million likes on the viral TikTok video, it’s abundantly clear that some of Joey’s audience agrees with his assessment. In his latest attack on toxic gym culture and bad etiquette, Joey underlines the importance of respect while recording others at the gym.