Lya Bavoil was the overall best lifter at the 2022 FFForce French Nationals. 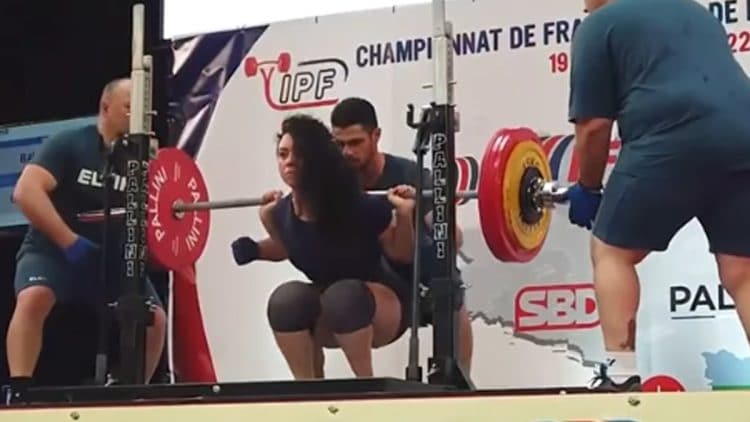 Powerlifter Prescillia “Lya” Bavoil appears to be on track to defend her IPF World Championship crown later this year, as she just impressed everyone at the 2022 FFForce French Nationals. The competition took place from March 19-20, in Albi, France, and Lya Bavoil was crowned the National Champion for the sixth year in a row. In addition, she was the overall best lifter, having claimed two French Records and two Unofficial IPF World Records in the 69 kg weight class.

Lya started the day off great, as she unofficially broke the IPF Record in the first event. She squatted 210.5 kg (464.1 lbs), which is 5 kg (11 lbs) heavier than the current IPF World Record. The current IPF record is also claimed by Lya, having lifted 205.5 kg (453 lbs) at the 2021 EPF European Classic Powerlifting Championships. It is widely known that Lya excels in squats, and everyone was pleased to see that she crushed another huge lift.

Following an impressive performance throughout the entirety of the competition, Lya Bavoil also managed to unofficially beat the current IPF World Record Total. The three of her lifts added up to 550.5 kg (1213.6 lbs), which is 2.5 kg (5.5 lbs) heavier than the record she set at the 2021 EPF European Classic Powerlifting Championships.

You can watch all of Lya’s lifts here:

Lya Bavoil weighed in at 65 kg (143.3 lbs), which is significantly lighter than the 69 kg weight class limit. However, despite being the lightest lifter in her division, Lya claimed the win with ease.

The victory in the 2022 French Nationals extends Lya Bavoil’s win streak to a tally of 9 consecutive competitions. In addition, throughout her career, Lya failed to stand atop the podium only two times, and she has taken part in 21 sanctioned competitions. At only 28-years-old, there is no doubt that she will add a lot more wins to her already impressive resume.

Her greatest success came in the past year, as she won both the World and European Championships.

Prescillia “Lya” Bavoil will now continue her preparation for the 2022 IPF World Classic Powerlifting Championships, which will take place from June 6-12, 2022, in Sun City, South Africa. However, it is still unclear if she will compete in the 69 kg or 63 kg weight class.