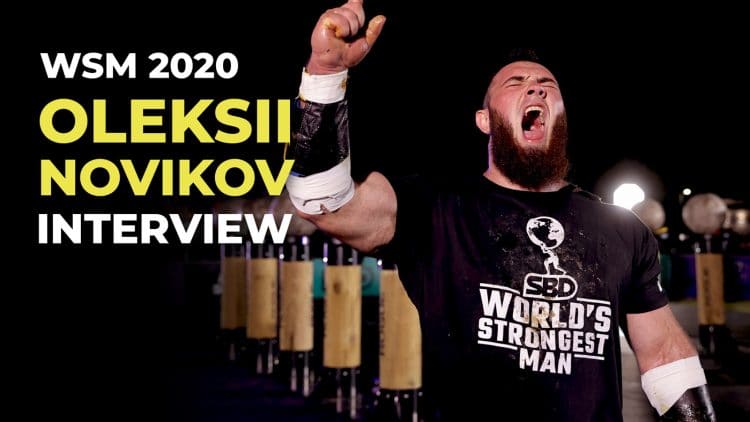 It was quite the run for the Ukraine’s Oleksii Novikov during the 2020 World’s Strongest Man, that saw him end the competition atop the podium. Now he discusses his massive win, as well as the other huge accomplishment he hit during the week.

Heading into the 2020 WSM, there were a few people that were considered to be the favorite. However very few people picked relative newcomer Novikov, who at just 24 years of age had only one appearance at the WSM under his belt. Nevertheless, he would prove everyone wrong by not only winning the entire competition, but dominating at nearly every turn. While most fans were surprised by this notion, especially considering the fact that he is now tied for the youngest person to win the WSM, Oleksii was not. In fact, as he told FitnessVolt, this was a dream of his that he expected to come true.

“It’s unbelievable. I’m so happy, I can’t explain it. It’s my dream come true,” Novikov said. “I made history and for me it’s unbelievable. In my country it’s very important because the last time this title was in Ukraine, it was 2004, with Vasyl Virastyuk. Now it’s my title.

“I was young, maybe 8 years old when I saw this competition on TV,” Novikov continued. “I did not understand all the levels to the competition (back then), but it’s incredible. I’m really happy that this happened, it’s my dream.”

One of the major pieces of news to develop during the World’s Strongest Man Finals, was that Oleksii Novikov had set a new world record. This occurred during the first day of the finals, when he did a 537.5kg (1185lb) 18-inch partial deadlift. Although he was not planning on leaving with a new world record under his belt, he explained that when the time came he knew that he would succeed.

“I was sure I would be top three, but I wasn’t sure about the record,” Novikov explained. “I didn’t know about the world record, but once I did it I knew I could do more…ten kilos or maybe more. I wanted to do a little more. Five or ten kilos, not a lot.”

Judging by how quickly the weight moved for Oleksii, there is no doubt that he could have gone heavier, and perhaps will in the future.

Reflecting On The World’s Strongest Man

Throughout the majority of the 2020 WSM, Oleksii Novikov was dominant, winning three events and being in the top 3 for an additional four. Given the way the event transpired, it comes as no surprise that his favorite part of this year’s contest was the 18-inch deadlift. However he was fairly honest about what he felt was the biggest difficulty he faced over the course of the contest.

“The deadlift was the easiest event for me. I felt with this event I was very comfortable because it went good for me once and I can do more than the world record,” Novikov said. “I was worried about the Keg Toss because I have a problem on the top.

No problems in the power, but a problem getting it over the top. That was number one, but second was maybe the Stones because it’s so high for me. I’m really short for strongman and it’s a hard one for me but I took third place in Stones, it was a great position for me.”

With how hard he trained, Oleksii Novikov was not surprised by anything he came up against during the competition. Not only that, but with him being as young as he is, there is certainly a bright future ahead of this Ukrainian strongman.