No Result
View All Result
StrongmanOP-ED

Through A Series Of Events, Brian Shaw Has Landed Himself In The Perfect Position To Get A Fifth World's Strongest Man Title 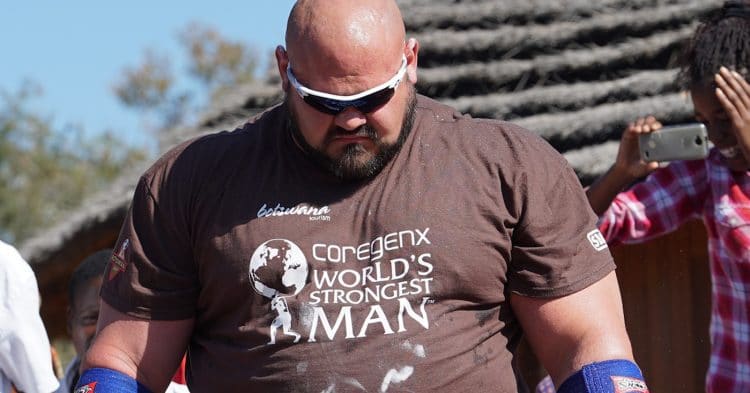 Heading into 2020 you would have been hard-pressed to find anyone who picked Brian Shaw to win the World’s Strongest Man. However, after an unexpected series of events, he seems primed to do just that.

Now don’t get me wrong, it is not meant in a disparaging way to say that Shaw was unlikely to win the 2020 WSM. It just meant to say that it appeared that his prime may have been behind him. In the peak of his career, he won four contests between 2011 and 2016, but those days had seemingly passed. At the 2019 WSM, he scored a disappointing sixth place, then he was unable to qualify for the Arnold Strongman Classic this year, failing to do so for the first time in over a decade.

So by all accounts it seemed like the best days of elite strongman wins were behind Brian Shaw. Yet with a week to go until the 2020 World’s Strongest Man, it seems that he could be on the brink of his fifth title win. So with that in mind, let’s take a look at how we got here, and how likely it is that he will win this event.

How Did We Get Here?

Well to put it simply, 2020 is how we got here. That sounds like a ridiculous answer, but in large part this sums it up. Things got complicated from the start as the global pandemic shut down strongman competitions for the majority of the year. Then slowly various circumstances began to dwindle down the remaining competition.

It started out with fan favorite Hafthor Bjornsson who decided to retire after claiming the deadlift world record, and a tenth straight Iceland’s Strongest Man victory. Next up was the winner of the 2019 World’s Strongest Man, Martins Licis revealed that he was sitting out this year, after a car accident caused him injury. Speaking of injuries, top contenders for the throne Mateusz Kieliszkowski and Rob Kearney also suffered injuries that are stopping them from being able to compete.

So it seems that through a variety of circumstances out of the control of Brian Shaw, the door has been opened wide for him to take control and win the 2020 WSM.

When it comes to accolades in strongman competition, few athletes are experienced as Brian Shaw. This will be his twelfth appearance at the WSM, having won the event in 2011, 2013, 2015 and 2016. Not only that, but he has also won the Arnold Strongman Classic on numerous occasions, landing first in 2011, 2015, and 2017.

Let’s not get it twisted, just because things have cleared out in terms of most of the top tier strongman talent does not mean that Brian Shaw does not have his own merits. While the last couple of years have seemed to show a decline in his numbers, the training for this event has seen him crank things up. It has served as a reminder of how talented he truly is, and that he still has plenty to offer the sport.

Now there is still a tough road ahead of Shaw if he wants to get his fifth title. However given the aforementioned circumstances and the way he has been looking in training, he seems to have a good chance at winning.

Mariusz Pudzianowski won five WSM titles which are the most in history, if Shaw does win this year’s WSM title, he will tie with him.

It is important to remember that Brian Shaw also has a lot of his own natural skills that he offers the contest. Some of the events that have been announced seem to favor his skillset, particularly with yoke-types of exercises. He also has been putting up some serious deadlift numbers in the build-up to this, having previously held the deadlift world record.

Shaw will also be bringing a ton of experience into the World’s Strongest Man, having competed in the event 13 previous years. He has not looked as great in the last few years, but he is in prime position to, at a bare minimum, do well in each event.

What Stands In His Way?

Just because we are putting a focus on the chances Brian Shaw has at winning at the WSM, does not mean that there is no chance for someone else to beat him. Admittedly a lot of the people who were expected to pose a threat to Brian are not competing at the show. Nevertheless there are a ton of other incredible athletes that will still be taking part in the event.

JF Caron and Tom Stoltman, both of whom bested Shaw at the 2019 WSM, will be taking part in this year’s WSM. The other Stoltman brother, Luke is also competing, after landing just below Brian in 2019 and showing big improvements this year. These are just a handful of the people who seem to stand some sort of chance of potentially getting the better of Brian, and in the end anything can happen when the contest goes down.

So Will Brian Shaw Win The 2020 World’s Strongest Man?

Obviously there is no way of knowing for sure, but it seems like a good possiblity that Brian Shaw will leave Bradenton, FL with a fifth World’s Strongest Man title. It did not seem this way at first, but a perfect storm has brewed to seemingly pave the way for his victorious return. The 2020 WSM goes down November 11-15th, and we will be on the edge of our seats to see how it unfolds.