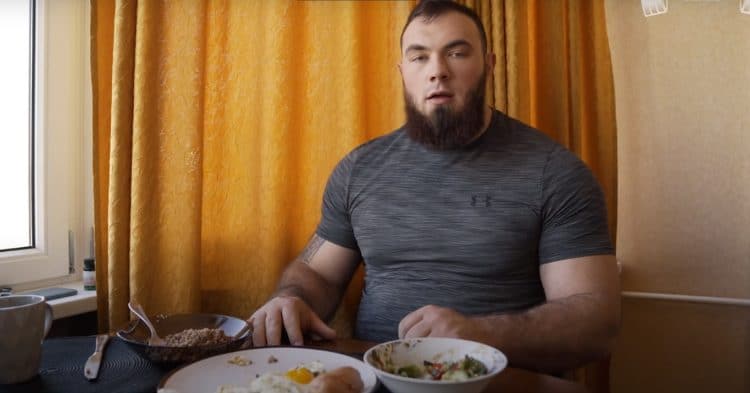 Today, I’m going to fascinate and horrify myself( and everyone reading) once again with Oleksii Novikov’s Strongman diet which earned him the title of World’s Strongest Man last year.

Oleksii Novikov is a fast-rising Strongman superstar that is either winning or placing on the podium on nearly every show he enters. When it comes to Strongman, he’s at the top of the food chain at the moment, giving all the top guys a run for their money.

His daily food intake starts at 6 a.m. with the first meal of the day after which he goes to sleep. It’s nothing crazy, a medium-sized protein shake,  a cup of oats with hot water with avocado as a side dish. Oleksii says this is just to pack on the calories for the rest of the day. After he finishes his oats he takes a hand full of various vitamins and supplements which he downs down with the protein shake.

After his first breakfast, he says he will sleep until about 9:30 a.m. and then gets a second breakfast. However, hilariously enough, he oversleeps his breakfast time. In order to wake him up a combined effort of an alarm clock, the camera crew, and his loving girlfriend is required. The second breakfast is 7 egg whites with 4 yolks with a side of 2 sausages, 150g of buckwheat, a bowl of grilled veggies with what appears to be some dressing on it. What’s interesting to note is that Oleksii mentions that even though he is having difficulty eating this much food at the moment, he will be bumping up the caloric intake in two weeks. He says that he expects his body to adapt and desire even more food by that time.

After a hearty breakfast which is then followed by a very fun-looking scooter ride through Kiev, it’s time for the first lunch. For his lunch, Oleksii eats two slices of fish(it looked like salmon), sliced peppers, and tomatoes with some lettuce. Oleksii briefly mentions that he considers that a “light snack” and a bit later he and his lovely girlfriend will be going to his mother’s place for “chicken shashlick”.

It’s now 4 p.m. and Oleksii is at his parents’ house for some chicken shashlick.  From what I could gather looking at how the “chicken shahlick” looks like, it’s basically a shishkebab but served a bit differently. Marinated/seasoned meat and various vegetables spiked through a wooden stake and roasted over a grill/barbeque. While we, the viewers, are left waiting for the second lunch to be ready, Oleksei shows us some of his old workout equipment. The equipment includes makeshift Atlas stones and a keg toss stand with some kegs.

At 8 p.m. after some quality time with the family and hanging out with friends, it’s time for the second to last meal of the day-homemade burgers. Oleksii says he uses yeast-free bread(maybe that’s the real secret to his strength), beef patty, chopped up onions, salad, cherry tomatoes, pickles, toast cheese, and a mustard-looking sauce.

After eating an entire cow’s worth of meat in his homemade tasty burgers, it’s time for a light midnight snack in the form of a casein shake and different pills(his words, not mine…not implying anything). Oleksii’s wording implies that the shake will be something basic like 2 scoops of casein mixed in with some water just to chug down the other multivitamin pills he takes before bedtime. However, you can clearly see Oleksii standing next to a blender and throwing stuff inside (Casein/regular whey powder being one of them) and blending a mean, calorie-dense, shake.

If you really want to know how HARD it is to eat 5k calories a day, take this into consideration. Oleksii says that at one time, when he started doing Strongman, he was eating every 40 minutes and that his gums started to wear off from all the damn turkey meat he ate. Imagine eating until your teeth start to wear out, now imagine trying to eat even more after that. That’s eating for Strongman.