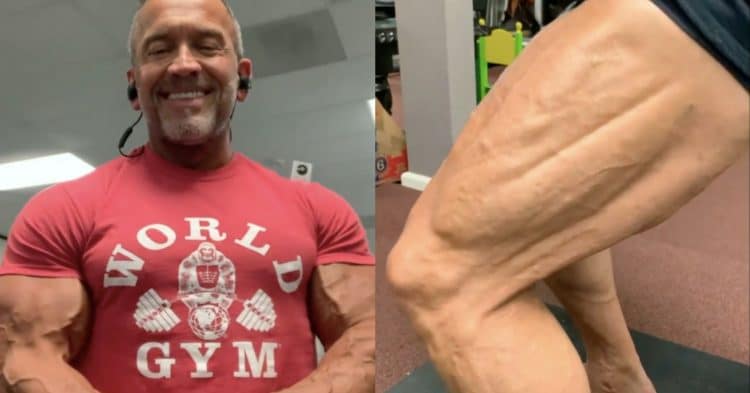 Bodybuilding veteran Lee Labrada has been causing quite a stir with his recent physique updates. He recently broke down how he managed to beat people who are bigger than him, and discussed how lean his physique is nowadays.

It has been a quarter of a century since the last time Labrada stepped on stage to compete as a bodybuilder. However he has not been wasting his time in retirement by letting his physique or his training go.

The last several years have seen Lee made a transition towards the nutritional side of things, developing his own diet plan to help people reach their fitness goals. Aside from that though, he has regularly kept himself in the gym, oftentimes working out with his son Hunter, who is a current IFBB Pro.

As a result, Lee Labrada is still in phenomenal shape, especially for someone who is 61 years old. We caught a glimpse of that recently, when he showed off his inane physique to kick off a newly rebranded Instagram page designed to offer nutritional advice.

He recently shared another video recently, to that same Instagram account, where he shared a look at his legs from about a year ago. The difference is that he broke down the way his diet and nutrition kept him in top physical condition, while also allowing him to beat men who were much bigger than he was back in the day.

“If you make it a top priority to eat healthy food and work out consistently, you can get lean and stay lean even into your later years,” Labrada wrote.

“I’m 61, I’ve been hitting the gym religiously since I was 16, and the last time I competed was when I was 35. I can’t lift as heavy as I used to, but I do train with moderate weights, and strict form in order to keep the stress on the muscles.

“As for my diet, I eat five meals per day year round. Each meal contains a high-quality protein such as fish, chicken breast or protein powder. I consume lots of rice, black beans, sweet potatoes, oatmeal and bananas. And I’m not afraid of healthy fats… I eat avocados, nuts and salmon every day,” Labrada continued.

“If I stray from my diet, my body makes me pay for it. I immediately sense a loss of energy, and I become lethargic. It’s amazing what your body can do when you treat it right. There’s definitely some genetics involved, as I was always very lean from the time I was a teenager. However, I was one of those hard gainers that had to struggle to gain weight.

“I weigh 170 pounds in this video,” Labrada concluded. “At 5’6”, that puts me solidly in classic bodybuilding competition size. At my last competition in 1995, I weighed 195 pounds. That’s almost 20 pounds less than the cut off for the 212’s these days; and back then I was beating men that weighed 230lbs or more.

“I hope this will inspire you guys to keep hammering it in the gym every day. Bodybuilding is a lifelong pursuit. It is a journey, not a destination. Travel well, my iron brothers and sisters! Love to all, Lee”

It goes without saying that Lee Labrada looks better than anyone should at 61 years of age. That is a credit to the hard work and dedication that he has put in over the years, leading to him maintaining almost all of his muscle mass and insane conditioning.

It is great to see him using his platform to pass on helpful tips and information to anyone willing to listen. He has a wealth of knowledge to offer, and a physique that is always impressive to see.