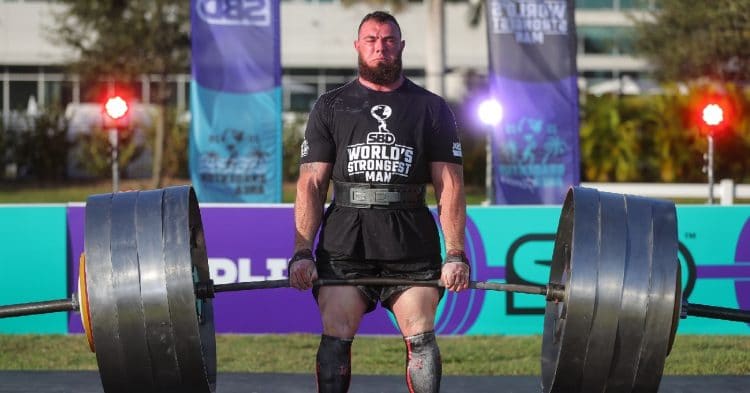 As the 2020 World’s Strongest Man continues to unfold, all eyes are on Oleksii Novikov. This was shown to be for good reason, as he managed to score a new world record in the finals.

Although there is a lot of respect for Novikov, he was largely overlooked heading into the 2020 WSM. However, he quickly proved that this was a mistake by dominating his group during the qualifiers, to make his way into the Finals. This led to a shift in focus, with the Ukrainian being looked at as a possible favorite to win the whole contest.

The second event of the WSM finals was an 18-inch deadlift, in which athletes took turns trying to pull an increasingly heavy amount of weight. This was something that most of the athletes knew was coming, with several of them posting videos training the lift before the contest. However, Oleksii Novikov put all of those athletes to shame when he not only won the event but set a world record at the same time, by pulling a whopping 537.5kg (1185lb).

Check out video from the record-setting lift:

The official world record for this deadlift was 535kg before Novikov broke it on Saturday. Eddie Hall also unofficially broke this record with a 536kg pull. However, Oleksii Novikov decided to shatter both of these numbers, pulling 1.5kg heavier than even Eddie’s unofficial record. It was an insane sight to behold. It should also be noted that Anthony Pernice did a 550kg partial deadlift in August, however this is an officially sanctioned World’s Strongest Man event officiated by a World’s Strongest Man referee, thus making Oleskii’s record official.

Three other athletes were also given the opportunity to do this record alongside Novikov. Adam Bishop, Jerry Pritchett, and JF Caron were all unable to match the numbers that Oleskii was able to achieve. Here are the full results from this event:

The finals for the 2020 World’s Strongest Man are still going strong, but Oleksii Novikov has certainly propelled himself into being a huge favorite to win. It will be interesting to see how the rest of the contest plays out for this elite strongman, but if you were not already paying attention to him, chances are that you are now.

Stay tuned to Fitness Volt for more coverage of the 2020 World’s Strongest Man.