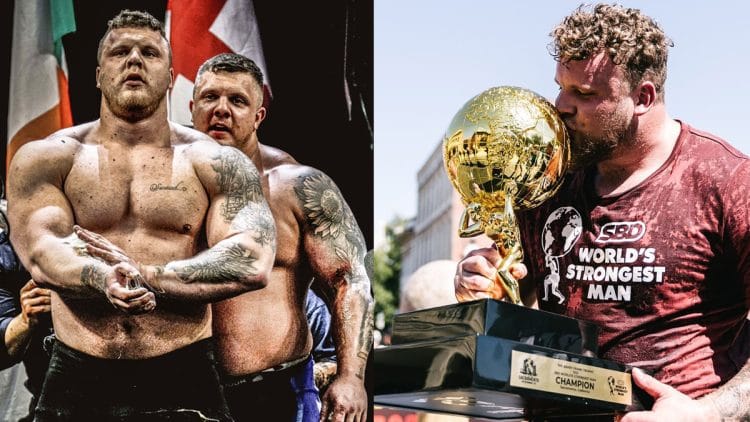 Tom Stoltman is a professional Strongman athlete from Scotland. He won the prestigious World’s Strongest Man (WSM) back-to-back in 2021 and 2022.  In addition, he won Britain’s Strongest Man (BSM), and was a two-time Scotland’s Strongest Man champion, as well as a runner-up at the 2021 Rogue Invitational.

Stoltman also holds the Atlas Stone world record of 286 kilograms (630 pounds), which he set on May 23, 2021. This is his complete profile, biography, training regime, diet plan, and more.

Tom Stoltman was born on May 30, 1994, in Invergordon, Scotland, and was diagnosed with autism at the age of five. Due to his condition, Stoltman had a difficult childhood and was bullied in school. Things got so out of hand at one point that he even contemplated suicide.

In Feb. 2022, the 2021 WSM shared a touching YouTube video on his channel where he opened up about his experiences growing up with autism. “The teachers didn’t understand it [autism]. A lot of people didn’t understand it,” revealed Stoltman pointing out the issues with the Scottish education system.

The most mortifying experience for “The Albatross” was when his physical education teacher told him he would “never.. be certain in life.” “Even to this day, I can still remember it all,” said Stoltman while narrating the incident. Due to his condition, Stoltman started secluding himself and sometimes went into hiding.

He wouldn’t act up when meeting doctors for a diagnosis, which made the doctors doubt whether or not he even had autism. The 2021 WSM winner’s mother ultimately had to record video evidence to show to the doctors.

Luke Stoltman Comes To The Rescue

Luckily, Tom found a strong (literally) supporter in his elder brother Luke (2021 Europe’s Strongest Man winner and five-time Scotland’s Strongest Man champion). The older Slotleman got Tom into strongman training. However, at first, the experience was nothing less than terrifying for “The King of the Stones.”

Per Tom, the commotion of people everywhere and wall lining mirrors caused a sense of paranoia in him. The 2021 WSM winner’s condition made him believe everyone was staring at him and talking about him behind his back.

Recognizing the disparity between Tom’s physical stature and his mental venerability, Luke introduced him to a clinical psychologist, Amy, who helped Tom overcomes his mental challenges. After starting counseling with Amy, Tom never looked back.

“I think with autism, the gym saved my life.”

According to Tom, a year and a half of therapy helped him feel so empowered that he had a gut feeling that he was going to win the 2021 WSM contest before it even started, and as they say, the rest is history.

At 27 years of age, Stoltman has two podium finishes at the WSM competition, including his 2021 win and a runner-up finish at the 2020 WSM. However, “The King of the Stones” believes that his proudest moment to date is getting in the gym as an autistic kid, lifting weights, and progressing.

“For me, autism is a superpower.”

At 27, Stoltman is still very early in his strongman career. At the time of this article’s publication, he has competed in 28 strongman competitions — 19 international and nine national. He has won one international contest and two national events. 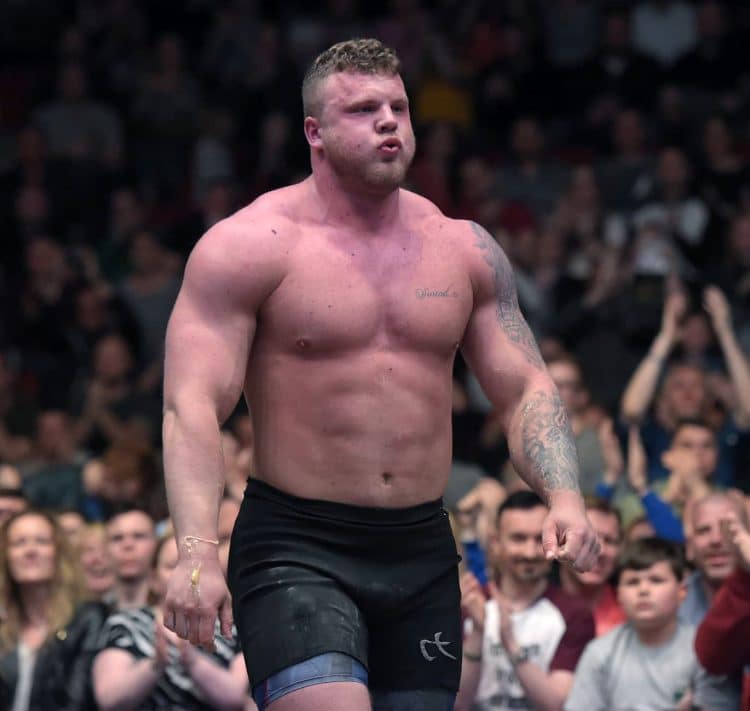 Per Strongman Archives, “The Albatross” has competed in four WSM contests to date and secured a position in the finals in three. Stoltman finished fifth at the 2019 WSM and runner-up at the 2020 WSM behind Ukrainian strongman Oleksii Novikov. At the 2020 WSM competition, Stoltman won three of the six events in the final.

“The King of the Stones” lifted the golden trophy at the 2021 WSM. Stoltman is the first man from Scotland to win the World’s Strongest Man title and the fifth British person.

He won the 2021 WSM title by beating the four-time World’s Strongest Man winner Brian Shaw. Judging by Stoltman’s WSM performance, it’d be safe to say that the Scottish strongman is at his best at the world’s biggest and most prestigious strongman event — WSM.

Tom Stoltman’s placing at the WSM contest has improved with every year, and now that he is the reigning champion, he’ll certainly be giving his best at the 2022 WSM to hold onto the coveted title.

Stoltman is known for his ability to successfully defend his throne and has a history of winning back-to-back titles. He won Britain’s Strongest Man title in 2021 and 2022 and repeated the feat at Scotland’s Strongest Man in 2018 and 2019. Will “The King of the Stones” be able to repeat the feat at the 2022 WSM? Only time will tell.

Per Strongman Archives, here is a snapshot of Tom Stoltman’s competitive career:

Done in the Gym

Unlike Luke, who has worked in an oil rig since he was 18, Tom trains and eats for a living. The Stoltman brothers, also known as “The World’s Strongest Brothers” follow an intense training regimen.

“The Albatross” started training at 17, and his training changes based on his upcoming contests. In his early years, Tom Stoltman trained seven days a week but now takes the weekend off to allow his body time to recuperate from his intense training regimen. Despite their busy schedules, The World’s Strongest Brothers hit the gym together six days a week.

“Learn the compounds, do your deadlifts, squats, bench press, overhead press. Do these four and hone them in.”

The Stoltman brothers began training for strongmen without access to specialized equipment. But the Invergordon natives did not let this come in the way of becoming the top guys in the sport. They improvised to make equipment, going out and foraging things in the Scottish Highlands. However, this is no longer the case, and the siblings have access to everything they need to win contests, including the renowned strength coach Dan Hipkiss.

In a YouTube video uploaded on their channel, The World’s Strongest Brothers take their younger sibling Harry through a workout to turn him into a strongman and follow in their footsteps. Given below is a training regimen that is great for strongman aspirants:

Per Luke, deadlifts are a pivotal exercise in strongmen, and a strongman aspirant should work hard on this lift if they want to compete in the sport. The World’s Strongest Brothers perform a variety of deadlifts in their workouts.

To perform a deficit deadlift, you need to stand on an elevated platform so that, at the starting position, the barbell is closer to your feet than the conventional deadlift. The deficit deadlift puts you at a disadvantage position at the starting and increases your range of motion by making pulling the weight off the floor harder.

Incorporating deficit deadlifts in your workouts can make the standard deadlifts feel easier to execute as you’ll be building strength in the lower part of the movement. Harry lifts 170 kilograms (374 pounds) on this exercise, and his goal is to build up to a new one-rep max deadlift.

Harry starts the workout with a few sets of warmup deadlifts. His goal for the training session is to get up to at least three sets at 200 kilograms (440 pounds) for reps.

If you are a newbie, don’t try to copy Harry — unless you want to get injured. He is one of the Stoltmans, and only a Stoltman can deadlift 200 kilograms while still a beginner.

For the third exercise of the day, the Stoltman brothers move on to the snatch grip barbell row. Get in position for the exercise by grabbing the bar with a wider than shoulder-width grip. Doing so will help emphasizes your upper back.

Harry performs three sets of eight reps with 100 kilograms (220 pounds) on the bar. Grabbing the bar with a wide grip helps in engaging the lats. This was the final compound exercise of the day, and Harry moves on to accessory lifter after this.

You could bring up a lagging body part with this advanced training technique by using heavier weights or performing more reps on your weaker side. Harry does two sets of 10 pres on this exercise while focusing on maintaining proper technique.

The Stoltman brothers wrap up their workout with a superset. Harry is strapped onto 150 kilograms (330.6 pounds) on the hip thrust machine and performs slow and deliberate reps on the exercise.

Finally, Harry calls it a day by performing 20 reps of pull-throughs using resistance bands. At the end of the workout, Luke emphasizes the importance of progressive overloading in training. Progressive overloading your muscles ensures you are building strength and muscles mass while avoiding a plateau.

When you are six-foot, eight inches tall, weigh around 380 pounds and compete in strongman competitions, you need a truckload of food every day to function at optimal levels. This is what Tom Stoltman eats on a typical day:

Although it is still relatively early in Stoltman’s strongman career, the 2021 World’s Strongest Man champ is turning out to be one of the most promising strongmen athletes. Tom Stoltman wants to go down in the strongmen annals as one of the greatest athletes and be an example for other autistic kids who want to achieve something.

Tom is scheduled to defend his World’s Strongest Man throne at the 2022 WSM (scheduled for May 29-29 in Sacramento, CA). The 2022 WSM contest has a stacked roster, and “The King of the Stones” will attempt to be the first strongman athlete to win back-to-back WSM titles since Brian Shaw won his third and fourth titles in 2015 and 2016.