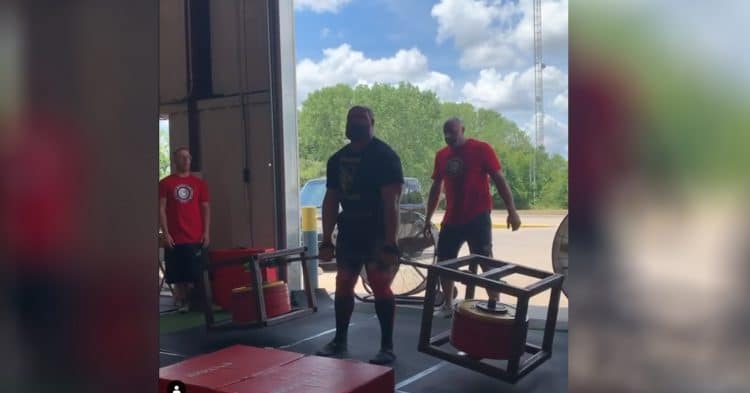 Anthony Pernice set the bar in the Silver Dollar deadlift last year when he pulled 1190lbs/540kg which was also an official record. Since then, Strongman Adam Bishop set an unofficial world record of 545kg/1200lbs which he did back in May.

But Pernice recently re-claimed the heaviest Silver Dollar deadlift on July 25th at the United States Strongman Farm Strong Record Breaker event, surpassing Bishop’s lift by 12.5 lbs. And, of course, it was an official record. He also bested his previous world record performance by 22.5 lbs w/ a Texas Power bar, he acknowledged in the post.

Now, for those unfamiliar with the Silver Dollar deadlift, it’s a deadlift where the bar is 18″ off the ground, twice the height of a standard deadlift setup. It’s also referred to as the partial deadlift. Therefore, you’re able to lift more weight although it’s not an easy lift by any means (he sure made it look easy though).

So there’s definitely some interesting history regarding the Silver Dollar deadlift, and with Pernice having set this new record with relative ease, we expect to see this number eclipsed at some point in the near future.

But as of right now, Anthony Pernice is preparing for the 2020 Strongman Corporation Nationals set to take place October October 15-17th in Montgomery, Alabama.

Sean Hayes has set an extremely impressive World Record while competing at the 2022 King & Queen Of The Throne....

Rhianon Lovelace is the best strongwoman in Britain. She put those skills to the test yet again, when she crushed...