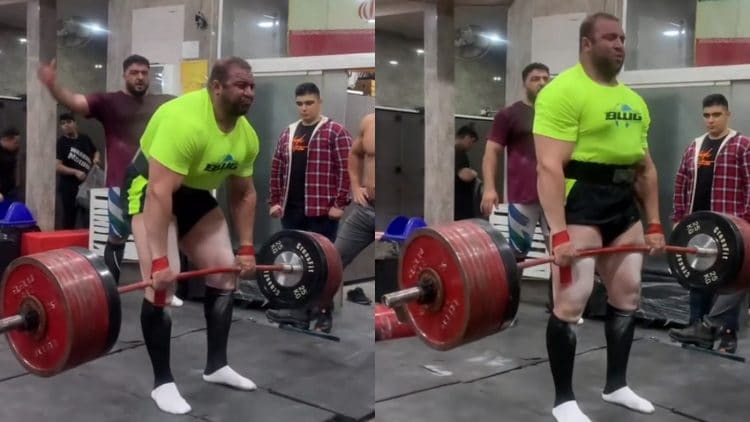 Iranian Strongman Peiman Maheripourehir put the strength sports world on notice after pulling 425kg in a raw deadlift for two reps. While the Iranian Strongman has yet to establish himself as the number one deadlifter in the world, his work in the practice room is advancing daily by leaps and bounds.

As one of the premier standards for measuring success in the weight room, deadlifts are a part of the big three in powerlifting, not including the overhead press. A deadlift requires full commitment from a lifter’s body to lift the weight off the ground.

Peiman Maheripourehir is Back in The Training Room

Strongman Peiman Maheripourehir recently took to his social media and posted what looked like a near inhuman raw deadlift of 425kg for two reps. Peiman admitted he was still tired from competition but possessed the strength to pull the hefty deadlift while practicing in the training room.

With a very tired body after holding a week of competition in Iran; It was a success for me 💪🏻💪🏻💪🏻

Despite the intermittent updates of Peiman Maheripourehir, the 2017/2018 Strongman qualifier reminded everyone just how close his technique is to catching up with the best in the world. With Maheripourehir’s deadlift numbers steadily improving, it will be interesting to see how long Maheripourehir practices before attempting to break Thor’s all-time world record.

The Iranian lifter has some ground to cover. However, Peiman Maheripourehir is adamant that he will be the one to break the astonishing 501kg deadlift record in due time.