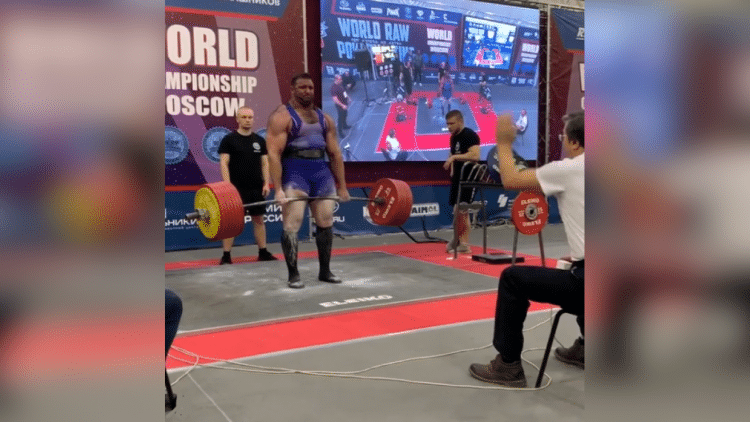 It was a big weekend in powerlifting, especially at the WRPF World Championships. It was here, that Peiman Maheripourehir got a win, as well as a new regional record.

Maheripourehir is an Iranian powerlifter and strongman who has accomplished a great deal over the years. Most notably, he has won the title of Iran’s Strongest Man twice, as well as having competed at the World’s Strongest Man competition. However in recent years, he has mostly shifted his attention to the world of powerlifting, where he has experienced a decent amount of success.

This powerlifting success from Maheripourehir continued at the World Raw Powerlifting Federation World Championships. It was here, that he competed in the 140kg+ weight division, looking for a big victory. That was exactly what he got too, as he won the meet. In addition to that, his second deadlift attempt saw him hit 405kg (891lb), for a new Asian Record.

Check out the video of the amazing deadlift:

This is quite the performance from Maheripourehir, but you can clearly tell that he can lift heavier. The way Peiman explains it in his post, there were some serious delays in the competition. As a result, he was already a bit gassed, by the time he was able to attempt the deadlift. Therefore, he chose to go for a slightly more modest weight, if you can call nearly 900lb modest.

Maheripourehir is looking to compete at the WRPF Russian Championship next year. The event goes down in Yaroslavl, Russia on March 28th-29th, and here he wants to set a new world record raw deadlift. Currently, that record is set at 460kg, which is less than 40lb away from Peiman’s deadlift training record of 422.5kg.

Whether or not Peiman Maheripourehir pushed himself to the fullest is irrelevant. He was still able to get a win, and break the Asian record at the same time. On top of that, he still has some time to get up to that world record.