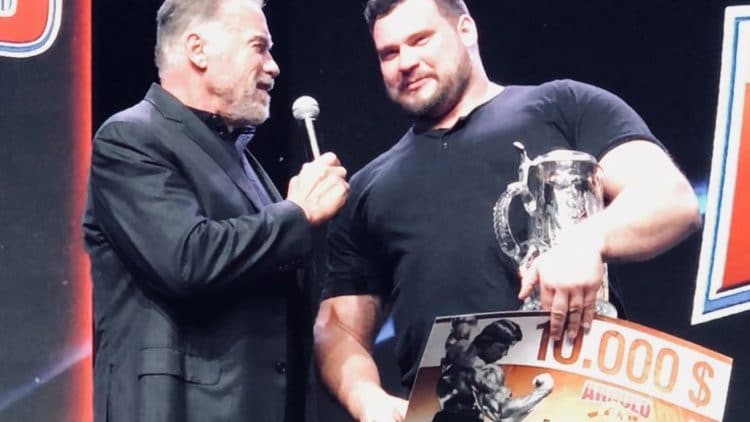 Arnold Classic Europe was held this weekend in Barcelona, Spain. The event lasted from 28th to 30th September. We have seen many super strong athletes with world-class results. The Latvian strongman Martins Licis was the most successful in the sea of muscle mountains and Konan’s Barbarians. He literally blew his rivals away by lifting 803 lbs eight times!! Licis is the new Arnold Classic Europe Pro Strongman champion!

Take a look at his spectacular deadlift set in the Instagram video below. A 28-year old American born Martins Licis even claimed he had some extra gas left in his tank! His strength is simply brilliant. This amazing video will be a social media sensation for a long period of time.

803lb (365kg) deadlifts for 8 repetitions, to secure the win at the @arnoldclassiceurope competition! Even some extra left in the tank ? … Thank you for the video and yelling @reddpanduhh ! [email protected] @sbdapparel @oddhaugen @probodycoach #strongman #deadlifts #pulls #posterior #arnoldschwarzenegger #weightlifting #powerlifting @kingofthelifts

The competition is important by itself since it may qualify athletes for Arnold Sports Festival USA. It is held every year in Columbus, Ohio. It also serves as the Pro Strongman World Championships.

Martins Licis is rewarded with $10,000 for this world-class performance. He also secured his spot at the 2019 Arnold Strongman Classic. The trophy is handed over to Licis by former Mr.Olympia and actor Arnold Schwarzenegger himself! What an honourable moment!

“With @schwarzenegger, receiving my prize for winning first place at the @arnoldsports festival! Hats off to @belsakstrongman! He would have beaten me if it were not for his bicep tear! Although I competed well, I had a horrible yoke carry which lost me a lot of points, and almost the entire contest…

It was my birthday the day before, and I got lost in the streets of Barcelona for hours with my good friends @reddpanduhh and @_danalyn (by the way, THANK YOU guys for all your support. You really came through for me in keeping ”it” together, cheering at me for events, and keeping me fed/hydrated!” cont.

What are your thoughts on this? Martins Licis has definitively had a weekend to remember!

Shots Fired! Phil Heath To Lee Priest “Save That Same Energy When I See You in Public”

The 2022 Rogue Invitational is just around the corner, as the Strongman action will unpack over the weekend of October...

After a series of unfortunate injuries forced Martins Licis to miss out on the greatest Strongman competition for the past...

The 2022 Arnold Strongman Classic is set to take place in Columbus, Ohio from March 4-5. The 20th edition of...