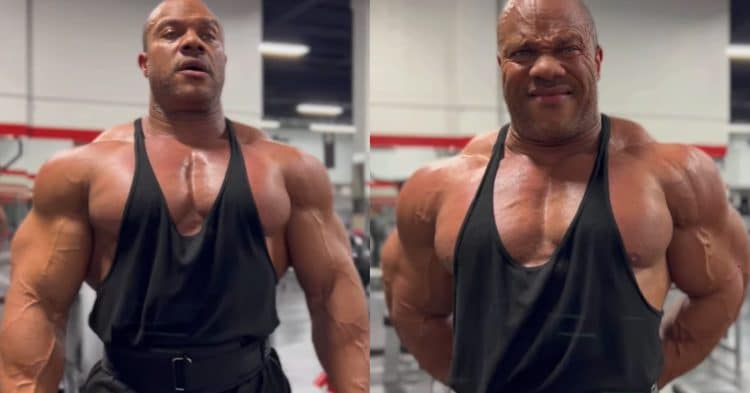 Seven-time Mr. Olympia winner Phil Heath recently shared a chest, shoulders and triceps workout. Heath last competed at the 2020 Mr. Olympia and finished third in the open division. This was after his seven-time Mr. Olympia winning streak ended at the hands of late Shawn Rhoden in 2018. As of now, Heath is not likely to return to competition. However, he is staying busy in the gym and shared an upper body workout on his YouTube channel. Chest was the primary focus of the training session.

Phil Heath went through the intense session and later shared his thoughts on using machines, the importance of eccentric work, and finer details of the way he performed the workout.

Phil Heath started the day with four supersets of seated chest flyes and seated presses on the converging chest press machine. Heath made sure to keep limited resting periods between the sets to make sure his muscles were pre-exahausted before jumping in the workouts.

After getting fully warmed up, Heath moved on to inclined bench press. Phil Heath stated that he mostly did hammer strength inclined bench press in the gym. However, the machine he is currently using is different. Heath positioned his seat fairly low during this workout to make sure that his hands were aligned with his lower chest at the bottom of the press and he was pushing the handles upward.

After feeling the pump with the inclined press, Heath turned his attention to lower chest on the machine. He positioned his hands towards the base of the handle to get a wide grip. This enabled him to stretch the chest more at the bottom of the press.

Heath incorporated a standard seated chest press with this workout and performed a superset with minimal rest periods in between.

Phil Heath continued further and performed seated chest flyes on the cable machine to wind up the chest workout session. He then moved on to work the shoulders.

Phil Heath headed straight to the dumbbell racks to begin the shoulder workout. He started with lateral raises with dumbbells.

Heath continued with dumbbells for the next shoulder workout and performed front raises medley. It consisted of five reps with a neutral grip and five reps with prorated grip. He worked each arm individually for this workout rather than using both arms simultaneously. However, for the second set, he performed with neutral grip and cranked out pronated grip front raises simultaneously using both arms.

Heath concluded the training session with triceps push-down. Instead of using a regular straight bar, Heath used a V-bar for grip. In spite of his wide frame, Heath was comfortable holding the V-bar and got maximum contraction with his back resting against a pad for stability.

After the workout, Phil Heath did a quick breakdown of the training session and shared some valuable insights into his training.
One important aspect of Phil Heath’s training session was the use of machines more than free weights. Heath stated that machines significantly reduce the chances of injuries stemming from technical errors, form, and misalignments. Therefore he prefers to use machines instead of free weights, especially when training alone. Heath also mentioned that he has followed this method even during his days as a competitive bodybuilder.

“Obviously the technique… I mean there is not much you can screw up and that’s the reason why, throughout my career, training by myself, 99 percent of the time… I used machines. It’s the easy way tk stay injury-free,” Phil Heath said.

Phil Heath is not likely to return to competition anytime soon. However, that also means that he will keep himself occupied with other endeavors, sharing quality bodybuilding content seems to be one of those. It will be interesting to see what else the seven-time Mr. Olympia shares next from the wealth of knowledge and experience of competing at the highest level of bodybuilding.

8 Ways to Get Better at Pull-Ups and Chin-Ups