Martyn Ford is learning from the best ahead of his fight with the Iranian Hulk. 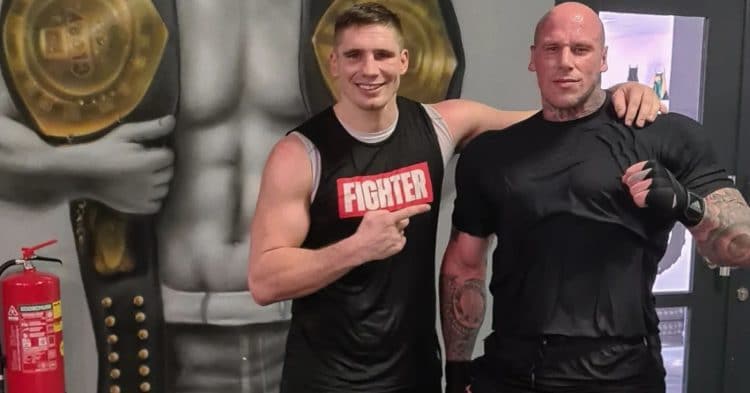 Bodybuilding giant Martyn Ford, dubbed “the scariest man on the planet” is giving his all to prepare for the fight against Sajad Gharibi, nicknamed “the Iranian Hulk”. The fight is scheduled to happen at London’s O2 Arena on April 2nd, 2022. With less than two months left to prepare, Martyn Ford is teaming up with some of the best fighters in the world, hoping to learn something new.

This time, Martyn paired up with a World Champion in kickboxing, Rico Verhoeven. Rico claimed the title in 2014 and holds it to this day, making him one of the best fighters in history. Martyn shared a video post sparring and we can see that Verhoeven did not hold back, as his eye started swelling up badly. However, in the video’s caption, he expressed his gratitude for Rico’s help.

You can see the video here:

“I mean, I would like to say it was close…. BUT I’d be lying 😂😂😂, what an incredible morning of education. Absolutely love LOVE LOVE this sport. The only way you learn is to push your comfort zones. I think sharing the ring with the world champ is definitely doing that….”

However, that was not the end of the swelling. Most injuries have a tendency to get worse before they get better. A few hours after the training session, Martyn shared a selfie from home. After cooling down a bit, his swelling increased, and his eye seemed to be completely shut. Martyn described this in the comments as “Learning the game,”.

“For those who doubted I was taking this seriously, when I say I am 100% in. Sparring with literally the best in the WORLD. It doesn’t get any more serious than that. I’m here to learn, to develop, to become the BEST VERSION of ME possible, and more than anything…..”

The scariest man on the planet will take on The Iranian Hulk. It will definitely be a historic fight, as both men are humongous. Martyn Ford is known for his size and tattoos, while Sajad is a lot heavier than him. Martyn Ford does have previous experience in combat sports, as he has done MMA, Brazilian Jiu-Jitsu, and boxing for many years now. This explains why he wants to come out victorious in the fight.

As far as stats go, Ford is going to have a clear height and reach advantage, being 7 inches taller than Gharibi. However, the Iranian Hulk is packing 100 lbs more of bodyweight, on his 6-foot 2-inch stature. Martyn Ford is also 39-years-old, while Sajad is 10 years younger than him.

There have been rumors about a fight between the two for the past couple of years. In 2019, both guys signed contracts to an MMA fight in the Polish MMA promotion called KSW, however, this fight was canceled with no explanation as to why.

After that, they had another fight that was rumored to happen, but it was also canceled. However, it was said that Sajad had signed a contract to engage in a bare-knuckle boxing contest instead of an MMA fight.

Martyn Ford’s training session with Rico Verhoeven could be very beneficial for his boxing skills. He has already shared a few videos in which he does some boxing exercises. With all the experience he has accumulated, the fight is bound to be extremely interesting.